Betting on the Rugby World Cup 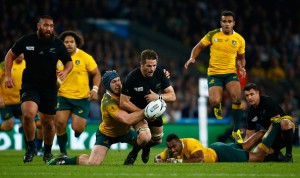 Richie McCaw of New Zealand loses the ball as he is tackled by David Pocock of Australia during the 2015 Rugby World Cup Final match between New Zealand and Australia at Twickenham Stadium on October 31, 2015 in London, United Kingdom.

As rugby began to enter the professional era, the need for a global international competition was an obvious one. Looking back now, it seems strange that it took until 1987 before the first ever officially sanctioned Rugby World Cup took place but nearly 30 years on it has become one of the most highly anticipated events in the sporting calendar.

The tournament now takes place every four years and if you’re planning to place a bet on the next Rugby World Cup, here’s what you need to know.

In eight tournaments to date, there have only ever been four winners of the competition. New Zealand are the most successful side having claimed the trophy on three occasions while South Africa and Australia have two trophies each with England’s solitary victory coming in 2003.

The All Blacks are widely acknowledged as the most successful team in the sport and they are the current holders so betting on New Zealand to win the 2019 Rugby World Cup in Japan may seem like a logical decision.

After an initial round of qualifying matches, twenty teams head to the tournament itself where they are split into four pools, each containing five teams. After a round of pool games, the top two countries in each section then progress to the knockout stages, starting with the quarter finals, through to the semis and then on to the Final itself.

There is also a third place play off, known as the bronze final, played between the losing semi finalists so there are plenty of matches to bet on once the tournament gets underway.

If you regularly bet on rugby then you’ll know that there are few shocks in the sport and in the early world cup rounds there can be some real mismatches. In 2015 in England for example, Eventual champions New Zealand played Georgia, Namibia and Tonga during the pool stage and won each game comfortably.

There would have been little point in betting on the All Blacks for those ties – they would have been listed at 1/100 if you could have found a market – but other matches are much more evenly balanced. England v Wales in the same group phase is a perfect example of a tight 80 minutes which would have been tough to predict at the outset.

That England / Wales game would also have been perfect for those who enjoy live rugby betting as the Welsh came from behind to win late on and deliver a decent profit for those that had backed them while they were down.

Betting in play options increase during the tournament but the main live bookmakers such as bet365 and Stan James are always among those you should check out.

The side markets will always increase whenever the world cup approaches and aside from betting on the outright winner, you can stake on the top try scorer across the competition. You can also bet on the winners of each pool so there are lots of ante post punts that you can take.

For each individual game, there is first try scorer, winning margin, number of points in each half and much more. Most bookies embrace the Rugby World Cup but some have more side markets open than others so choose an outlet carefully if this is important to you.

William Hill and Ladbrokes are particularly good when it comes to declaring a set of alternatives to the result betting but most of the main bookmakers will get involved when the bigger tournaments come around.

You can also get some more value by looking out for some world cup betting promotions. These might include refunds if a certain team wins the tournament or acca refund during the group stage. We’ll know exact details ahead of the next event but be certain that there will be plenty of deals that can be snapped up.

The Rugby World Cup is important both in the sporting and the betting world. It took a while to become established but it’s a great event and one that can be enjoyed even more with a small stake in a choice of markets.