Please keep in mind that all odds mentioned are accurate at the time published on 15/11/2018 3:10 pm and are likely to change.

Over the last fortnight or so, the flat season has drawn to a conclusion, with last Saturday’s November Handicap meeting at Doncaster being the final event of yet another unforgettable campaign.

In turn, the National Hunt season is now beginning to take the full focus of the racing public, with Cheltenham hosting its threeday November meeting, commencing on Friday afternoon. The highlight of the fixture will be the BetVictor Gold Cup Handicap Chase, over a distance of two miles and four-and-a-half furlongs. The race is due off on Saturday afternoon at 14:25 GMT for a maximum of twenty runners.

This race has given us many topclass winners in years gone by, and Saturday’s renewal looks to be no exception, with a plethora of highquality horses from some of the leading stables from the length and breadth of the British Isles.

Firstly, this race should not be associated, or be seen as a prelude to the Cheltenham Gold Cup that is raced over three miles, two furlongs in March. This ‘Gold Cup’ race was inaugurated back in 1960, and has had various sponsorships to maintain the event’s history as a key race in the early part of the National Hunt season.

The BetVictor Gold Cup is a handicap race, which means it is difficult, however, not impossible to win on more than one occasion. Only five horses have won the race twice in their careers, with Cyfor Malta being the last horse to claim double victory back in 1998 and 2002. Legendary jockey and trainer pairing, AP McCoy and Martin Pipe combined for Cyfor Malta’s two victories, and the pair were successful in claiming seven victories from 1996-2005.

Nigel Twiston-Davies trained Tipping Tim to victory in this race back in 1992, and claimed his fifth win with Splash OfGinge last year. Will the tenyear-old veteran repeat its success from last year? Read on for our advice in the big race.

Solid Hopes Rest with Rather Be 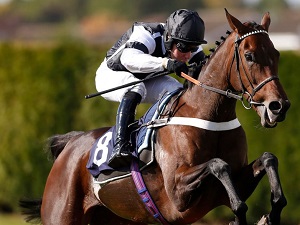 Current Champion Trainer, Nicky Henderson has claimed multiple victories over many years in an illustrious training career. His only success in this race was back in 2003 with Fondmort. The Lambourn handler looks to hold solid claims with his only intended runner in the race – Rather Be.

The seven-year-old is currently available at 5/1 with Coral and Ladbrokes amongst others, with the main basis of the son of Oscar’s chances being based around his last trip to Cheltenham, where he was denied by Mister Whittaker, over course and distance at the Festival meeting back in March.

Rather Be was repelled by a head on that day, but is in receipt of a ninepound pull at the weights from Mister Whittaker this time around. Ground conditions will suit and Henderson’s charge looks sure to run well. 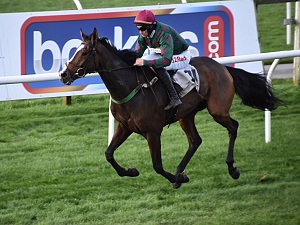 Mister Whittaker returns to Cheltenham this weekend to do battle once again with Rather Be, but the hike in the weights may halt his progress this time around. Coral go best price of 13/2 on Mick Channon’s stable star.

The talented six year-old was turned out at Carlisle less than two weeks ago to claim a Listed Chase over two miles and four furlongs, but that victory could potentially be his undoing here. Mister Whittaker was raised a further seven pounds by the handicapper, which may put the stop on his obvious improvement.

Similar to Rather Be, Mister Whittaker is a very sound jumper and is likely to be in the frame, but he is ultimately passed over on this occasion.

Emerging trainer, Neil Mulholland has been known to plunder big prizes in his relatively fledgling career, and Kalondra could be another to add to the list. The improving seven year old has already been booked by leading jump jockey Noel Fehily and could be the one to be on at the best available odds of 7/1 (generally available).

Kalondra is a fast improving sort over fences and looked certain to play a hand in the finish of a good race at Galway, before falling two out. Appeals as the type to win a good prize this season and certainly looks handicapped to do so. Is proven around Cheltenham and will relish the ground. Solid each way claims at worst. 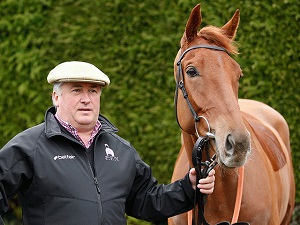 I’ll throw two more horses into the mix for consideration. Movewiththetimes is lurking at the bottom of the handicap for top trainer, Paul Nicholls and could be worthy of each way interest at the generally available price of 16/1.

The seven-year-old has some good form over fences, but can have a tendency to put the odd poor jump in. Movewiththetimes came to grief last time out at Fakenham as an odds on favourite, but given a clear round, he can be involved at the finish.

Happy Diva ran just over two lengths behind Mister Whittaker at Carlisle last time out and with the weight adjustment since, the seven-year-old can run well at the definitely overpriced 20/1 with Ladbrokes and Coral.

Kerry Lee’s charge tends to run better in strongly run races and this will definitely suit here. The popular lady trainer also has Top Gamble entered in the field, but the more unexposed Happy Diva could well be the one to be on from an each way perspective.

I’ve studied the merits of all the entered runners in this field several times over the recent days, but I’m unable to get away from the strong claims of Rather Be. He ticks all the boxes in my opinion with excellent course form, he is relatively well weighted, especially with one of his main rivals, and is the sole choice of his illustrious trainer. It is a little obvious to tip up a favourite for the race, but Rather Be really does hold solid claims.

Of the remainder, Kalondra could really be a big danger to all, and I wouldn’t necessarily put anyone off backing him. However, the current ante-post odds of 20/1 on Happy Diva are too big to pass by. The mare has shown her recent well-being and is capable of running a huge race at the prices.