Best Referee of the Season

Anyone who pays close attention to social media will notice that football fans speak about a number of elements to the game. One interesting development concerns referees and it’s fascinating to note the reaction by supporters when certain refs are allocated to their upcoming matches.

Are certain referees to be feared? Should we be dreading a forthcoming game that features a certain official? With the 2019/20 Premier League campaign now underway, it’s a good time to look back at the previous season and see if we can identify who the best referee is moving forward.

Pick of the Bunch

This is actually a difficult question to quantify. In terms of players, it’s easy to crunch the stats to determine who is the best. For strikers, that equates to goals and for midfielders, it’s a combination of goals and assists. Defenders need to return good numbers in terms of interceptions and tackles but what stats do we use for referees?

It’s said that the best referees are the ones that we don’t notice. The officials that stay in the background and don’t make the game ‘all about them’ are favoured by players, managers and fans alike. With that in mind, let’s look at some statistics from 2018/19 that might help us to determine exactly who was the best referee in the EPL. 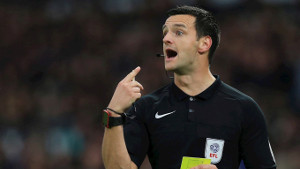 We won’t notice a referee if they aren’t producing a raft of yellow and red cards in a match so this seems like a good place to start.

The ref with the lowest number of yellow cards per game in 2018/19 was Andy Madley. We should mention him because of that stat but as he only officiated in two matches, we can probably overlook his claims. Madley took charge of two fixtures, issuing two yellow cards and no reds.

Other referees including Simon Hooper and Roger East took charge of ten games or less so, we firstly need to get a decision as to how many matches is a fair starting point for us to make an assessment. This question is open to debate but we think it’s reasonable to only consider referees who officiated in at least 20 Premier League matches in the 2018/19 season.

That leaves us with a total of 11 refs and from that reduced list, only two produced an average of less than three yellow cards per game. Starting with Michael Oliver, this ref took charge of 30 EPL fixtures and he issued 83 yellows for an average of 2.77.

Only one man dips below this level so step forward Andre Marriner. Of 27 Premier League games covered last season, Marriner awarded 73 yellows at an average of 2.70. For reference, the official with the highest average of yellow cards per match is Mike Dean. A man who truly divides opinion, Dean took charge of 29 fixtures and issued no fewer than 129 yellows for an average of 4.45 per game. 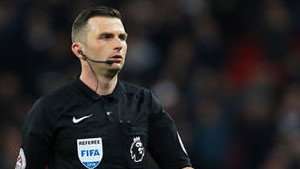 We’ve taken care of yellow cards for bookings but what about sendings off? If we come back to our two initial candidates Michael Oliver and Andre Marriner, we find that Oliver issued a relatively high number of seven red cards for an average of 0.23 per game. In contrast, Marriner produced just three reds for a low average of 0.11.

As for the highest number of sendings off – well, it’s back to that man Mike Dean. In his 29 Premier League games across 2018/19, Dean issued ten reds – three more than any other referee.

Using the above system, we should also give a mention to Anthony Taylor. He officiated in 32 EPL games last season – more than anyone else – but he produced just one red card. As for yellows, Taylor’s average remains a respectable one even if it does stretch just above the 3.00 mark. In 2018/19, Anthony Taylor recorded 102 bookings for an average of 3.19 per game. 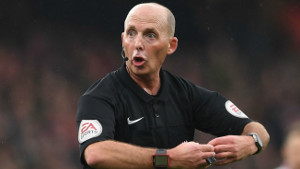 Of course, the other side to this argument is that a referee such as Mike Dean is simply doing his job correctly. Perhaps he’s apply the letter of the law and giving fouls, issuing red and yellow cards while other refs tend to let too many things pass by unpunished.

To address that theory, we could ask managers such as Tottenham’s Mauricio Pochettino to comment. At the end of Spurs’ game with Burnley in 2018/19, Pochettino angrily approached Dean and continually asked the question ‘you know what you are’. Fortunately, the Argentinian didn’t follow through with those comments or the fine and ban that were imposed would have been greatly increased.

Former Leicester City boss Nigel Pearson has described Mike Dean as arrogant and he doesn’t have a lot of fans in the game. It is, therefore, an interesting theory but perhaps we can ignore Mike Dean in our summing up.

Of course, it’s not all about cards and we should take into account the context of the game. The same source of statistics also provides information relating to fouls committed and awarded. Beyond that type of information, things start to get a little complex. Perhaps one ref’s figures are skewed by the fact that he officiated in a number of bad tempered local derbies while a rival simply enjoyed meaningless games in the middle of the table.

Without the time to carry out such extensive research, we will have to assume that each man received a broad spectrum of games at either end of the Premier League. Based on that assumption – we’re back to the same three men – Michael Oliver, Andre Marriner and Anthony Taylor.

We’re going to move on from Oliver at this point as he issued seven red cards in 30 matches. Only Mike Dean produced more reds and that’s a slightly disproportionate number to the amount of yellows.

So we’re left with Marriner and Taylor and, in all honesty, we just can’t split them. Perhaps Taylor is the rightful winner as he was given more games by the league than anyone else and that is no coincidence.

It will be interesting to pick this up again in 12 months time to see if both men remain at the top of the charts but for now, if you see either Anthony Taylor or Andre Marriner listed to ref your game, you should be relieved.