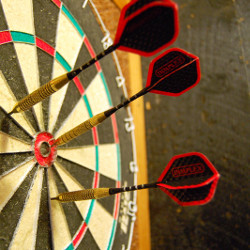 Darts has evolved from a mere pub pastime to become a serious sport and millions of pounds are wagered each year on the major darts tournaments. It’s been an interesting journey from a game that developed from the working men’s clubs of the 1960s and 1970s and in the present day the bookmakers love it.

Television was initially slow to pick darts up as it was a tricky sport to showcase. Without split screen technology you couldn’t focus on the board and the darts player at the same time but developments in that area have helped the sport to progress.

Now, darts is televised all year round but which of the best darts betting sites has moved to embrace it?

You can tell that betting sites are taking darts seriously by the amount of sponsorship money that is thrown at the sport. Recently, the likes of Ladbrokes, Betway and William Hill have become involved in major darts events such as the Premier League or the World Championship itself.

Darts is split into two divisions with the elite players involved with the PDC board and those who are bubbling under plying their trade with the BDO. Naturally, most of the sponsorship money is given to the richer PDC but the BDO isn’t entirely ignored and you can find darts promotions and extensive darts betting markets for both divisions.

Any Offers on Darts Betting?

Promotions can be a little rare for darts events but if you look at the really big darts tournaments such as the World Championships in January and the Premier League which begins during the following month, you should find a tempting selection.

The sponsors involved such as Betway and William Hill may have the best darts deals but most bookies like to get involved and it’s common to see offers from Paddy Power, Coral, Ladbrokes and more. Overall, promotions from UK betting sites can focus more on football and horse racing but if you look hard enough, there are darts deals to be had.

Every UK bookmaker will be quoting markets for darts tournament winner and for the individual matches so you’ll have lots of choice but what about the side betting? This is less popular but can give us a little extra value at times so side markets are worth following.

Firstly, you need to think about what side bets you could actually place on a darts match or tournament. For match betting you can take a punt on which player will score the most 180s and this is where some bookies such as SportingBet and Winner are absent from the main darts odds comparison sites.

However, there is still a huge choice with William Hill, Ladbrokes, Betway, Paddy Power, bet365 and more all getting involved.

If we look at correct score betting then the choice is reduced but once again, all of the major names are there so if side betting on darts is likely to be important to you, then it’s better to stick with those familiar providers.

The same principle applies to live darts betting and as you would expect, bet365 are among the better darts betting options here. This bookmaker is the king of betting in play with more markets on offer than other bookies and the sport of darts is no exception.

But once again, live betting is carried by other operators and will still be quoted when it comes to the larger, televised events. William Hill, Coral, Betway and more will all have betting in play options so unless you want every single darts match covered, there is no reason to switch your allegiance.

When it comes to tournament betting, there is a huge choice in terms of darts side markets and the ongoing Premier League is a good example of this. Here, you can speculate on whether a player will make a nine dart checkout, a maximum 170 checkout, the highest checkout or you can take a punt on the nationality of the Premier League tournament winner.

Other darts betting options are more obscure and, for instance, you could back a Dutch darts player such as Michael Van Gerwen or Raymond Van Barneveld against the rest of the field. Less popular darts bets such as this one aren’t covered by all the darts betting sites but if you do want something a little more ‘niche’ then the likes of Coral, bet365 and Betfred are the ones most likely to be declaring prices.

Best bookmakers have always provided markets for darts but like most sports, these have grown in line with the rise of the Internet and 24 hour satellite TV. Now you can watch darts all year round and there are darts odds being quoted for every event whether it’s televised or not.

All the best darts betting sites will offer some form of betting markets but some take it more seriously than others and as usual it’s mostly the big names that provide the wider range of options. If it’s darts promotions, free bets you’re after then look to the World Championship or the bookmaker who is sponsoring that particular tournament as they are more likely to have the best offers.

Overall, darts is great to watch and betting on any of the markets could enhance your enjoyment of this growing sport.