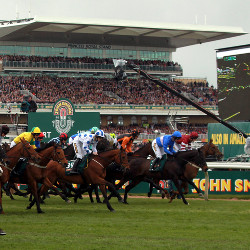 In terms of betting money, it’s the biggest single sporting event in the world so it makes sense to consider taking a punt on the Grand National betting. For action and drama, you just can’t beat this race and millions will be watching, either on TV or at the Aintree course, when the starter kicks things off at this April meeting.

But some serious gamblers stay away from the National, believing that it’s nothing more than a lottery. It’s certainly true that we’ve seen some very high priced winners over the years and they include recent victors Auroras Encore at 66/1 and Mon Mome at a staggering 100/1. 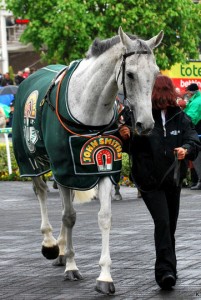 A lucky proportion of occasional bettors will have certainly struck lucky at that sort of price but like all horse races, the National has produced its share of identifiable trends. Here are some pointers you could look for Grand National betting each year.

Weight seems to be very important in this race and since 1983, only three horses have won it while carrying 11st or more. The heaviest of these was Neptune Collonges who was saddled with more than 11st 5lbs when he took out the 2012 renewal.

Form is also far more important than you might think and it’s very rare indeed for a horse to complete a maiden victory at the Grand National. Since Gay Trip’s triumph back in 1970, every single National winner has won at least one race over three miles coming into the big one at Aintree.

Earlier races such as the Irish National can also provide useful indicators while it also helps if a horse has experience over this testing Aintree course. The fences are formidable and among the list of previous winners are a healthy percentage that have jumped here before.

Along with those big winners, the race can often go with the bookies’ favourite with around 50% of winning horses featuring in the top eight in the betting. So, while there may be more shocks in this race than in any other, it is perfectly possible to put a strategy in place when betting on the Grand National.

Of course, you could look to play it a little safer by taking an Each Way bet which will still pay out if your horse is placed. If you’re doing this, choose your bookmaker wisely because some will give you more value than others.

In a field of this size, a bookie would typically pay down to four places, but for the Grand National, some will extend this to five. In 2015, bet365, Coral, Paddy Power and Ladbrokes were all paying down to five places and while this may change in subsequent years, it’s worth checking them out in the first instance.

In such a major event, prices for each horse can also vary greatly between each bookmaker so it’s good to be vigilant and to check odds across a selection of operators. A best odds guarantee system may also help so check that your bookmaker has it in place for the Grand National.

Meanwhile, as you might expect, bookies can also bring in a whole host of one off promotions for the big day. One popular offer among some companies will refund your stake, if you back a short odds horse and it is beaten by a rank outsider who starts longer than a certain price.

888sport are one operator who offered this deal in 2015 but once again, it’s important to check that it covers the National. Daily newspapers may also give you a free bet – usually in the region of £10.00 – and that’s another area where you can get some extra value.

Remember, these are just examples and they may not apply for the current year’s race but this is the time when bookmakers will definitely introduce some new promos so if you’re betting on the Grand National, keep checking the news feeds.

The Grand National is an amazing spectacle for serious and recreational bettors alike and while it can often produce a shock win, there are trends that can help you pick the victor. Meanwhile, don’t forget those bookmaker offers that can bring some extra value for the big event.