Please keep in mind that all odds mentioned are accurate at the time published on 13/10/2017 1:23 pm and are likely to change.

It was a summer that yielded plenty of promise for this Everton side and while they lost their key striker Romelu Lukaku, the money gained from his £75m sale to Manchester United was invested straight back into the squad.

Big money signings of Jordan Pickford, Michael Keane and Gylfi Sigurdsson, plus the return of Wayne Rooney hinted at a positive campaign but it’s actually been a very poor start.

On Sunday, Everton travel to newly promoted Brighton and defeat here could spell the end of Ronald Koeman’s reign at Goodison Park.

Despite Everton’s troubles on the pitch, the Toffees are favourites to win this one but they are odds-against across the board and available at a best price of 6/4 with Sun Bets. The draw comes in at best odds of 23/10 with bet365 and SportingBet while victory for Brighton is available at a best of 12/5 with MarathonBet.

When you consider the form table, both sides have an identical record over their last six matches – winning two, drawing one and losing three. Both have seven points and are separated in the bottom half of the table just by goal difference.

Everton are the bigger club with the better players but based on those facts, the draw looks a decent option at that 23/10 price. 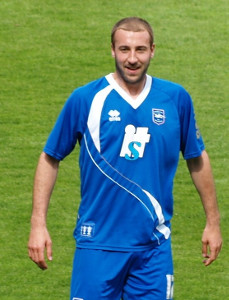 We’ll confirm our result tip a little later but who are the players who can decide the outcome of this fixture? Everton players dominate the first goal scorer betting with Wayne Rooney the obvious candidate to find the net first at best odds of 6/1 with Sun Bets.

Brighton first get a mention through Glenn Murray at a best of 7/1 with Sun Bets but it’s been a barren period for the former Crystal Palace striker so he may be best avoided. Unfortunately for the Seagulls, Tomer Hemed is suspended and he would have been a more likely option.

One name that interests us is that of Icelandic midfielder Gylfi Sigurdsson who is best-priced at 15/2 with bet365 and Sun Bets to score the first goal. The former Spurs and Swansea man has done little to justify his £45m price tag so far but this could be the game where we see his deadly set pieces come into play.

Dealing with the popular side bets first and you can get a top price of 11/10 with Paddy Power and 10Bet on Both Teams to Score. Between them, Everton and Brighton have managed just nine goals in 14 combined matches so no-one will be backing that with any great confidence this weekend.

The overs and unders markets could also be influenced by those poor scoring stats: Backing over the 2.5 goal line would currently bring 39/25 with MarathonBet but considering the collective shyness in front of goal, betting under that line would appear a better option at best odds of 8/13 with SportingBet.

As for the result this really is a tough one to call and when we first looked at the fixture, our first reaction was to call the draw. Neither team has been convincing and they look evenly balanced on form and that would tend to back up the theory.

However, there is clearly better quality in this Everton squad and also, the loss of Tomer Hemed for Brighton could be pivotal. You look at this Seagulls line up and wonder where the goals will come from so, we’ll tip Everton to win it but if you want a little more value than those 6/4 win odds then you could back the away side to win to Nil which comes in at 11/4 with 888Sport.

All our tips are a little bold this week but it’s not a game where you can play safe with any great confidence so we’ll finish our round up with a correct score of 2-0 to Everton which is listed at odds of 10/1 with Winner Sports and William Hill.