Please keep in mind that all odds mentioned are accurate at the time published on 22/09/2017 5:57 pm and are likely to change.

Last season these two sides were closely matched as they both climbed out of the Championship, occupying the two automatic promotion slots. In 2017/18 however, they have endured very different starts to the new campaign with Newcastle’s Magpies flying high and the Seagulls of Brighton struggling to pick up points.

Sunday’s live encounter between these two will therefore be one of the most interesting games of the new season so far but how are the bookies viewing things in the lead up to kick off?

Brighton will start here as favourites and you can currently pick up Chris Hughton’s men at a top price of 9/5 with bet365. Victory for Newcastle is priced at odds of 19/10 with bet365 once again with the draw completing this result market at a best of 11/5 with Paddy Power and 188Bet.

Based on form you would have to see some value in a Newcastle side that has won its last three matches while Brighton have won one and lost two over the same period. The visitors are still struggling against the top teams in the Premier League but are picking points up against the weaker sides and for value alone, the away win is worth adding to your betting slip this weekend. 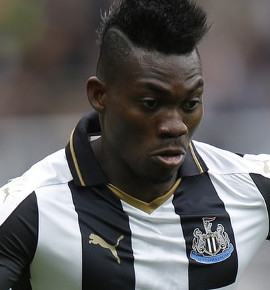 Things are tight in the first goal scorer betting with Newcastle’s Dwight Gayle starting things off at odds of 11/2 with Sun Bets to open the scoring. Brighton’s Glenn Murray follows at a top price of 59/10 with MarathonBet while Tomer Hemed is also close to the very top of the market at a best of 13/2 with bet365 and Sun Bets.

Of those three, only Hemed has actually registered a goal this season so it’s not going to be an easy pick in this market. Other options from midfield and beyond include Christian Atsu at best odds of 10/1 with bet365, James Murphy at a top price of 12/1 with Sun Bets and Ayoze Perez at best odds of 17/2 with Sun Bets once again.

It’s certainly a tough market given the relative form of the strikers on both sides but Newcastle’s Perez is a good contributor from midfield and looks a good shout in the anytime goal market at best odds of 7/2 with Paddy Power for a strike in 90 minutes.

Between them, these two sides have scored 10 goals in 10 combined matches so that rate of one goal per game doesn’t necessarily hint at a high scoring 90 minutes. However, they have been up against high quality opposition and it could be a relief for them to play each other – two newly promoted sides – and that could lead to a rather more attacking afternoon.

With that in mind, the Both Teams to Score bet looks a solid option at best odds of 11/10 with Sun Bets. That’s a good value figure for a bet that we felt would be odds on right across the board.

If you also subscribe to the theory that we could be in for an open and attacking afternoon then there are alternatives. Betting over the 3.5 goal line would currently yield a top price of 15/4 with 32Red and 888Sport and once again that is a really good figure from a set of bookmakers who are clearly expecting a very subdued afternoon.

The two sides have certainly made contrasting starts and critics will say that both will struggle at the end of the campaign. Newcastle are experienced at the higher level and some decent form coming into this fixture makes them our tip to take the three points.

Elsewhere, the side betting has some excellent value if, as we expect, the sides combine to produce an entertaining and goal-laded 90 minutes.