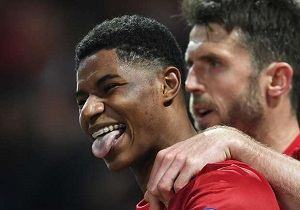 It’s been a very mixed season for Jose Mourinho and his Manchester United side as far as the Premier League is concerned but in Europe, the Red Devils march on. United have reached the semi final stage of the Europa League and on Thursday, they travel to Spain for the first leg against an in-form Celta Vigo.

The result market is very tight so there is already some value but you can boost that even further with a good choice of price boosts from across the sportsbooks.

Manchester United are the favourites to win this game and, at the time of writing, the best odds in the open market are listed at 183/100 with MarathonBet. 888Sport, meanwhile, are quoting 17/10 on the outcome but if you don’t already hold an account here, you can lift that figure up to a more exciting 6/1.

New customers to 888 can therefore sign up via the landing page and register a few basic details before making a first deposit. This should be at a minimum of £10.00 and we advise using a debit or credit card as eWallets such as Skrill and Neteller are excluded from the promotion.

You should also have the benefit of funds clearing straight away and then you can stake between £5.00 and £10.00 on Manchester United to beat Celta Vigo on Thursday May 4, 2017.

If you are successful and United win it on the night, profits at that book price of 17/10 come back into your account as cash to withdraw or carry on betting. The balance, up to that price boost of 6/1 comes back as free bet tokens and you have 7 days to use these before they expire.

Winner Sports are also on board with this game and have listed a set of price boosts that can be taken up by all customers. There is no maximum stake beyond the bookie’s usual rules and any profit will come back to you as cash into your account rather than a free bet token.

It all starts with two key strikers on either side and Winner have an increased figure of 4.00 on Manchester United to win on the night and Marcus Rashford to score. The young striker has had a frustrating season in many ways but with Zlatan Ibrahimovic injured, he will get his chance up front and is United’s best option for a goal.

A similar offer sees Celta Vigo to win and Iago Aspas to score which is now at 5.50. United fans will recall a very fruitless spell that Aspas had with Liverpool but he has been far more prolific in La Liga and, if Celta are to get anything from this game, he is the man most likely to do the damage.

Winner Sports continue with United to win and Both Teams to Score which has been taken from a price of 5.00 to 5.50. That’s a small price lift but as we’ve seen, Celta have some potency and Manchester United have been prone to concede in Europe so that price represents some decent value.

Finally, you can get 8.00, from 7.50 on Manchester United to win both halves. That could be a long shot with United drawing a number of games both at home and in Europe recently but if you’d been considering that option, it’s another excellent price.

Please check all terms and conditions before you proceed but any or all of these price boots could give you a nice enhancement on potential profit in this crucial Europa League tie.