Please keep in mind that all odds mentioned are accurate at the time published on 04/05/2017 1:07 pm and are likely to change. 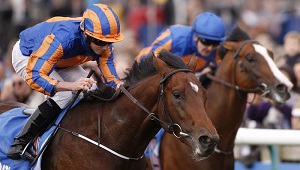 Here we are then: the first of flat racing’s ‘classics’ takes place on Saturday as part of the Guineas Weekend; first up is the 2000 renewal that looks ultra-competitive – certainly on paper, anyway.

The best three-year-olds from far and wide will duke it out for the honours on Newmarket’s undulating Rowley Mile, and these will be looking to follow in the footsteps of previous winners such as Frankel, Rock of Gibraltar and King of Kings.

This is the first chance that most of these horses will have had a chance to shine on such a grand stage, and with most in the field only having a handful of previous appearances between them this race can be something of a minefield for horse punters to pick their way through.

Hopefully the following will be of use!

The team of trainer Aidan O’Brien and owner Sue Magnier has combined for plenty of success in recent years, and the 2000 Guineas is a race that has been particularly kind to the duo with a trio of winners in the past decade alone.

Perhaps that is the reason Churchill is the early market favourite, although his odds have dipped slightly from 6/4 with bet365 to 13/8 in the past fortnight or so. He is a solid, workmanlike campaigner with five wins on the bounce, but all of those have come as a heavy odds-on favourite.

He has been run pretty hard already as three-year-olds go, with O’Brien describing the horse as ‘mature’, but typically 2000 Guineas are a little less worked than this ahead of their assault on the prize.

So, in a more dynamic field here than he is used to, is Churchill’s short price any value whatsoever?

You could argue that Barney Roy (4/1 with William Hill and Paddy Power) is better placed than the favourite. With less miles on the clock (he’s raced twice compared to Churchill’s six outings), he is as exactly as a three-year-old should be: fresh, exciting and ready to run. His victories to date have come at prices of 5/2 and 9/1 and in fairly progressive company too – the JLT Greenham Stakes is perennially competitive, so to win that by two lengths is pleasing. The Richie Hannon charge must be respected here.

Any preview of the 2000 Guineas will make some kind of reference to Frankel, the great 2011 champion whose place in flat racing folklore is assured.

Intriguingly, the fruit of his loins – Eminent – is in the field here, and rather than being some kind of nostalgic fancy holds genuine appeal at 5/1 with BetFred.

He took down the Craven Stakes in April in convincing fashion and appeared to have gas in the tank as he crossed the line – always a welcome sign, and both of his wins have come from powerful finishes after a dawdling start. If Eminent can piece both parts of his race together, the son of Frankel is a live contender to emulate his legendary sire.

The last of the shorter priced contenders is Al Wukair, and while he hasn’t blown anybody away in his two starts (two wins) you can only beat what is put in front of you. At 9/2 with bet365 though, it is easier to make a case for Barney Roy and Eminent.

The betting for the 2000 Guineas has been a mixed bag over the years, with a trio of favourites taking the honours consecutively in 2011-2013.

But a couple of long odds champions – Makfi at 33/1 in 2010 and Night of Thunder at 40/1 four years later – suggests punters can get a longer priced fancy on board should they wish.

You certainly wouldn’t be put off Dream Castle at 16/1 with bet365 and Betway that’s for sure. Anther of Frankel’s foals, he started favourite for the JLT Greenham Stakes and led the race 1f out, before being hung badly left and opening the door for Barney Roy.

His other start, earlier in April, was a classy romp home in a low-class field at Doncaster. But with such inexperience in this race, we’re happy to promote the chances of a colt at an expansive price who showed so well in the Greenham a month ago.