Get an Enhanced 9/1 Premier League Double this Sunday

Please keep in mind that all odds mentioned are accurate at the time published on 18/03/2017 4:36 pm and are likely to change. 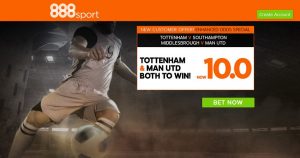 Sunday sees three games in the Premier League and with Spurs, Manchester City, Liverpool, and Manchester United all in action, all of those fixtures will have some bearing on the top four places at the end of the season.

Tottenham host Southampton at White Hart Lane while Manchester United make the trip to Middlesbrough in the early kick off and 888Sport have chosen these matches to compile an enhanced double worth an impressive total of 9/1.

If you were to bet individually on these matches, the best price on a win for Spurs currently stands at 8/11 with bet365 while that same 8/11 is the best figure listed with bet365 and 188Bet for Manchester United to come away with the points against Middlesbrough.

Both teams are odds on across the board and if you were to place a win double anywhere then you wouldn’t be able to claim any exciting odds so this 9/1 price from 888Sport becomes even more tempting. If it sounds interesting, here’s what you need to do in order to claim it.

This is an offer for new customers to 888 who sign up via the promo page and register for a new account with a few basic details. Once this has been complete – it should take around two minutes – it’s time to make a deposit and your opening credit should be at a minimum amount of £10.00, using any method other than Skrill or Neteller.

Now, with those funds at your disposal, it’s time to place that bet on Spurs to beat Southampton and United to take the points against Middlesbrough. Pick the win double, staking between £5.00 and £10.00, and if your bet is successful, returns at 888’s books price will come straight back into your new account while the profits over and above, up to the amount of 9/1, will come back as free bet tokens.

Please check all terms and conditions relating to this deal and note that with 888Sport, free bet tokens are issued within 72 hours of bet settlement and when they arrive, you have 7 days in which to use them before they expire.

After a poor run of results that took them into the relegation places, Middlesbrough parted company with their manager Aitor Karanka this week so will that play into Manchester United’s hands? We saw how Leicester City rallied after sacking Claudio Ranieri, beating both Liverpool and Sevilla, and this can often be a time for teams to regroup and suddenly show some improved form.

That could be the case but ‘Boro are a weaker side and are in worse shape than Leicester with a poor run of results coming in recent weeks to put them in the bottom three. Manchester United on the other hand, seem to be back in form following a recent dip and are by far the stronger candidates for the three points.

Some punters may keep clear of Spurs following the news that their key striker Harry Kane will be out for some time with an ankle injury. Kane is crucial to Tottenham’s hopes of a top four finish but against Millwall last week, strikers Son Heung-Min and Vincent Janssen scored four goals between them so the club will feel that they have enough cover.

Two strong favourites combine with this offer and while there is little value in the open markets, a Spurs and Manchester United win double could land some seriously good profits with this 888Sport new customer deal.