Following the recent international break, the Premier League is back with a bang this weekend from the get-go as Liverpool host high-flying Manchester United at Anfield on Saturday lunchtime – 12:30 kickoff.

Injuries have played their part in the build-up to the game with Liverpool suffering the news of Senegalese forward Sadio Mane, who picked up an untimely hamstring injury while on international duty, that will leave the forward missing for around six weeks.

United themselves have some injury issues with Paul Pogba likely to be unavailable for a similar hamstring tear, while Marouane Fellaini picked up a knee knock on duty for his native Belgium, that is likely to give boss Jose Mourinho some midfield selection headaches before the game.

It seems as though the bookmaking fraternity are having issues in determining the favourite for this fixture, as many layers have both teams to win the match at the exact same odds. However, MarathonBet have taken the lead to offer Liverpool at the best industry price of 44/25 at the time of writing. United are a top price of 9/5 with SportingBet, while the draw can be had at 12/5 with 188Bet.

It is worth noting that the last three times these two sides played have ended in drawn results. Liverpool have to look back to March 2014 for their last Premier League win against their bitter rivals, while United have had four wins and two draws since that 3-0 defeat.

This game has been billed as a clash of two of the greatest managers the league has to offer, with the onus on Liverpool boss Jurgen Klopp to attack on home soil, while Mourinho generally sets his team out to be defensively strong in away games against the better teams and that itself makes this game so intriguing. Considering it is still early season, and both teams will not be at peak form following the international break, the draw looks to be the call here at 12/5.

With seven goals in seven games since his big money move from Everton, it is no surprise to see United’s Romelu Lukaku installed as the bookmakers’ favourite to be opening goalscorer. Sun Bets offer the Belgian hitman at the best odds of 21/5 to open the scoring. Daniel Sturridge is likely to start up front in Mane’s absence for Liverpool, and is next in the betting at 6-1 – again with Sun Bets. 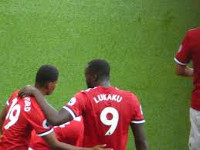 Roberto Firmino and Mohamed Salah are both 13/2 chances with Sky Bet and Sun Bets respectively, while Marcus Rashford is a top priced 15/2 shot, again with Sky Bet. The concern with choosing the England man is Mourinho could elect to use him from the bench after a hectic week on international duty.

Anthony Martial could be the one to be on at 15/2 with 888sport. The added bonus with the Frenchman is he’s taken the last two penalties for the Red Devils with success. As a safety net, we will select Martial to score anytime at 37/13 – again with 888sport.

The last five meetings of these two north-west powerhouses have yielded less than 2.5 goals per game, but things could be about to change this weekend, with goals on the horizon. Considering Liverpool have been involved in 25 goals in their opening seven Premier League games and United have already scored 21 this season, both teams finding the net could well be a profitable selection for this game.

Liverpool have had defensive struggles at times, but are potent in attack, while United look likely to score with almost every attack it seems this season and with that in mind, 10Bet offer the best price of 14/19 for Both Teams to Score.

A combination bet of the Draw and Both Teams to Score at 38/11 with 188Bet could be another wager worth consideration in a game that could turn into an absolute classic! With attacking intent from both teams so far this season, these tips will hopefully add to the enjoyment of the occasion.