888Sport continue to keep busy with enhanced odds deals for new customers and they’re back again with a couple of excellent price boosts for Saturday’s evening kick off in the Premier League.

Jose Mourinho’s Manchester United are preparing to take on Newcastle United with both teams needing the points to keep their season on course and the figures in question are quite considerable. 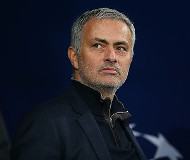 Under this 888 promotion, victory for Manchester United would return increased odds of 3/1 while a win for Newcastle United would see their price climb all the way up to a staggering 100/1.

Obviously those figures compare favourably with the prices on offer in the open markets. As a regular customer to 888Sport you could expect to get 27/100 on a Manchester United victory and 10/1 for Newcastle while you can improve slightly elsewhere.

Victory for Mourinho’s United is currently available at a best price of 3/10 with 188Bet while a win for Rafa Benitez’s Magpies is back at 13/1 with Paddy Power and MarathonBet. Those numbers are still dwarfed by the odds available under this promotion so let’s now take a look at the process.

The first step is to get involved with 888Sport so, if you don’t already hold an account here you can head across via the link and register. Only a few basic details are required and you should remember to input the Promo Code 888ODDS when prompted to do so. 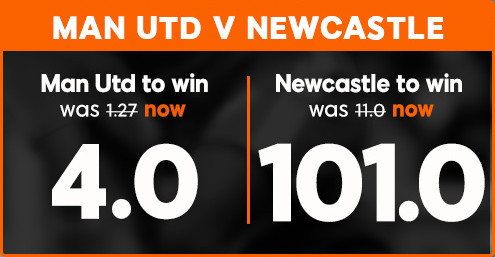 When this fast and safe process is finished you will land at the cashier where the minimum first deposit should be made at £10.00. Funds should be clear immediately and then it’s time to choose your bet.

You can’t get behind both teams so make a choice between Manchester United and Newcastle United to win the game and stake up to £5.00 on your selection. The match is the 5.30 evening kick off, televised live in the UK by BT Sport, and if you have called correctly, payment will be made in two steps.

Initial profits at 888’s relevant book price will come back to your account as cash and you can either withdraw or continue to play through those. The balance, up to whichever of those two price boosts is applicable, will then come back to you as free bet tokens.

Those free bets will hit your account within 72 hours and you will then have up to 7 days in which to use them before they expire. Those are the main details that you need to know but feel free to check all of the terms and conditions to make sure you are happy before going ahead.

The next step now lies in picking a winner but is it as easy as those odds suggest? Manchester United are way out in front in the markets and despite losing to Chelsea, prior to the international break, Mourinho’s men had won three in three to keep the pressure on Manchester City at the top of the table.

Newcastle United started the 2017/18 campaign brightly and were in the Europa League places at one point but have fallen away a little and have lost two in two as they head to Old Trafford.

The choice is yours and you can side with the bookies or look to back an upset but whichever way you go, the price boosts on either side could seriously boost your profits this weekend.