Please keep in mind that all odds mentioned are accurate at the time published on 13/04/2017 3:19 pm and are likely to change. 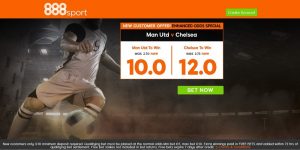 There may be some important matches elsewhere, but there’s no doubt as to the biggest game of the Premier League weekend. Title favourites Chelsea travel to face a Manchester United team who still retain hopes of a top four finish and the outcome of this fixture will have a great bearing on those aspirations for both sides.

It’s a clash of two of the biggest and most successful names in English football and the bookies have given us a tight market in the lead up to kick off.

Manchester United start as slight favourites here and you can currently back Jose Mourinho’s men at best odds of 7/4 with BetBright and 32Red. Those favouring the draw can get a best of 9/4 with BetFred and BetBright while a win for Chelsea is on offer at 15/8 with William Hill and BetBright once again.

When you consider form and the fact that Chelsea have been so strong this season, you may have felt that the visitors would shade the betting. There’s certainly value in Conte’s men so who are the men who will decide their destiny?

Diego Costa and Zlatan Ibrahimovic are locked in terms of pricing with some bookies but elsewhere, the Swede is favourite to open the scoring at best odds of 4/1 with Paddy Power and William Hill. Costa is very close behind at a top price of 47/10 with MarathonBet while Eden Hazard is next on the list at 13/2 with bet365 and 10Bet.

Hazard is in scorching form this season with 14 goals in 29 league matches and we’ve taken some profits on the Belgian in the anytime markets. After scoring at Bournemouth last weekend, there’s no reason to change a winning formula so we’ll back Hazard for a goal in 90 minutes at a top price of 29/10 with 888Sport.

Other strong contenders for an anytime goal include Willian at best odds of 24/5 with 32Red while for United, Paul Pogba is really due a goal and can be backed in this market at 9/2 with 32Red and MarathonBet to find the net in 90 minutes.

Last season’s corresponding fixture ended in a 0-0 draw and it may well be just as tight at Old Trafford this Sunday. One goal may be all it takes to settle the match and for that reason, the winning margin market is where we’re heading next.

But for our final tip, we’re going to the overs and unders market and based on what we’ve been saying, we have to favour betting under the 2.5 goal line at 8/11 with Paddy Power. It may not be tight after all, but based on recent games between these two, and considering there is so much at stake, that’s a solid bet and there’s a reason why it’s odds on. Finally, if you do want a look at the volatile correct score betting, Manchester United 0 Chelsea 1 looks excellently priced at a best of 17/2 – also with Paddy Power.

This game could well be as tight as the market is indicating and one moment of brilliance from either side can win it. Both teams have the right type of player to come through and convert but is Zlatan in the type of form to do this or is Diego Costa due to score and bring the points home to Stamford Bridge?

It’s one of the tougher calls that we’ve had to make this season but based on the entire campaign, we’re backing Chelsea even though they are conceding the home advantage. You can look for some new customer, enhanced offer deals around the net but at a standard price of 15/8 with William Hill for the win, there is already enough value in this Chelsea side.