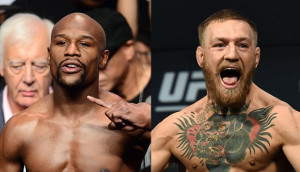 One of the more curious sporting events of 2017 is set to go off in Las Vegas on August 26. Formerly retired boxing legend Floyd Mayweather gets into the ring one more time to take on UFC fighter Conor McGregor in a match up which has really fired the imagination.

Whatever you may think of the bout, there is already huge interest from fight enthusiasts across the world while at the same time, the bookies have really embraced it.

This isn’t a crossover in the sense that a mix of rules has not been applied here. Instead this is a straight boxing match over 12 rounds. The fighters will be registered at the 154 pound mark and both men will wear ten ounce gloves.

All of this would suggest that McGregor is at a disadvantage as the Irishman has never fought professionally as a boxer. Unlike Mayweather, he has tasted defeat in his UFC career and all of this makes the real boxer a hot favourite with the bookmakers so let’s now see how they are reading it.

Betting markets for this fight were set up very shortly after the event was announced and Floyd Mayweather was immediately installed as a short priced favourite at best odds of 1/6 with a number of bookies including Winner Sports and Betway.

Elsewhere, victory for Conor McGregor is quoted at 59/10 with MarathonBet while the draw is on offer at a distant 60/1 with Paddy Power. Offers and promotions are starting to come through at the same time and Paddy Power themselves already have an enhanced deal for new customers where you can get 20/1 on Mayweather or 40/1 on McGregor for a £1.00 stake.

Clearly there is already huge interest and this will build in the weeks leading up to the fight but who should you be backing?

As a boxer, Mayweather could make history in Vegas by becoming the first man to achieve a 50-0 perfect record. 49 wins in 49 starts makes him a legend in the sport but he is 40 and coming out of a retirement that hasn’t seen him fight professionally for nearly two years.

McGregor is the younger man at 28 and could be in better shape but he has never boxed at a professional level. So, there are pros and cons for both fighters and while the bookies have clearly come to their own conclusion, it could be a hard one to call.

A bout between fighters from mixed disciplines is not a new phenomenon and the most famous example of previous events comes from 1976 when the great Muhammad Ali fought the Japanese wrestler Antonio Inoki.

Ultimately, that occasion turned into something of a farce with Inoki spending most of the time on his back, trying to kick out at Ali’s legs. In return, the boxer could barely land a punch on his already prostrate opponent.

Special rules had to be created for that fight but, as the match up between Mayweather and McGregor is purely based on boxing regulations, it is expected to be a much more serious affair. And, while it may not be a conventional boxing match, it has some predictable aspects of the sport with the trash talk already starting.

McGregor has come out to say:

No one in this boxing game knows what’s coming, trust me on that. When I step in there, I’m going to shock the whole goddamn world.

Mayweather for his part has been more quiet but then, it could be said that he has nothing to prove while his opponent has to justify the fact that he is stepping into the ring with a boxing legend in the first place.

Whatever happens, this is a fascinating prospect between two of the best fighters in their chosen sports. Will they be a good match in the boxing ring? We’ll have to wait until August 26 to find out but millions just can’t wait for the first bell to sound.