Please keep in mind that all odds mentioned are accurate at the time published on 09/09/2017 5:02 pm and are likely to change. 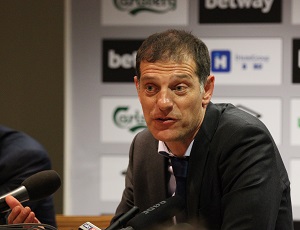 It’s been the worst possible start to the new Premier League campaign for Slaven Bilic and his West Ham side as they sit right at the bottom of the table. After three games, the Hammers have no points after three straight defeats condemned them to the foot of the league prior to the international break.

On Monday night West Ham host new boys Huddersfield Town and while this may seem like a perfect opportunity to get some points on the board, David Wagner’s team have started positively and this should therefore be an intriguing tie.

Despite their relative positions in the table, West Ham are the odds on favourites for this fixture and the hosts can be backed at a top price of 97/100 with MarathonBet. That figure could leave some definite value elsewhere and we have the draw at best odds of 13/5 with Betway while victory for Huddersfield is on offer at a best of 7/2 with bet365 and Boylesports.

While the Hammers struggle at the bottom, Huddersfield have taken two wins and a draw from their opening three matches and sit in an unlikely third place in the early Premier League table. Cynics will suggest that they haven’t played a strong side as yet and that may be true but that opening suggests that they have the quality needed to survive in the top flight.

West Ham should be a better side than their position suggests so this will be a test for the visitors. We’ll come back to the result but for now, who are the players who can decide the destiny of this game?

West Ham’s former Manchester United striker Javier Hernandez heads the first goal scorer markets at best odds of 4/1 with SunBets to open the scoring here. Hernandez has scored twice in his first three league games for the Hammers and was always an obvious choice as favourite.

Diafra Sakho is next on the list at a top price of 51/10 with MarathonBet while Andy Carroll can be found at 11/2 with bet365.

For Huddersfield, their star has been Steve Mounie who was bought from Montpellier in the summer. Like Hernandez, Mounie has scored twice in his opening three league games and the Benin international is an option at best odds of 7/1 with SunBets and Boylesports to score the first goal in this fixture.

Huddersfield’s Tom Ince is listed at a top price of 10/1 with bet365 and Winner Sports in this market but punters may prefer the midfielder at 15/4 with Winner Sports again for a goal in 90 minutes. Other options in the anytime market include Andre Ayew at best odds of 5/2 with Paddy Power but our pick here is Mounie at that same 5/2 with 32Red.

Last season, Huddersfield were seen as a dour side and the interesting footnote to their promotion season came with the fact that they went up with a negative goal difference. That sequence has continued to an extent – they have scored four times in those first three matches but punters will note that they have yet to concede at the back.

The Terriers should, however, receive their biggest test to date with Hernandez leading the line for West Ham and the Both Teams to Score option is going to be popular at a top price of 10/11 with William Hill.

For our final tip we’re switching to the overs and unders markets where over the 3.5 goal line is the call at best odds of 13/5 with 888Sport and 32Red. Despite the Hammers’ poor start to the season we think this is the perfect opportunity for Bilic’s men to get their first points on the board. Huddersfield did get a fairly kind opening draw but this game should give us a better indicator as to how these side’s respective seasons will develop.

It’s a West Ham win for us and, as a real outside punt you could look at a correct score in their favour of 3-2 which is out at a best of 30/1 with Winner Sports and 188Bet.