Please keep in mind that all odds mentioned are accurate at the time published on 07/02/2020 12:09 pm and are likely to change.

The merits of the ‘winter break’ come into focus over the next two weeks, as Round 27 of the Premier League has a staggered effect over the upcoming fourteen days.

Our focus turns towards the bottom half of the league standings this week, with a hugely important battle between Brighton and Hove Albion, who can give themselves a modicum of breathing space with a victory on Saturday evening – kick: off 17:30 GMT – against Watford, who can climb above their rivals with a win at the weekend.

The relegation situation is arguably the most interesting scenario of the Premier League season right now, with just eight points between Watford in 19th spot and Arsenal in 10th position. Nobody is safe within that boundary of placings, and every game will be crucial between now and the end of the season.

As you might expect, the Match Betting for this game is relatively close, but with a preference for the home side. Brighton can be backed at the best industry price at the time of writing of 6/5 with SportNation to reach 29 points after Saturday’s game. Unibet offer the top value on an Amex Stadium stalemate at 49/20, while Unibet again are best price on an away win for the Hornets at 27/10.

Brighton, managed by Graham Potter, need to address an alarming run of form as the Seagulls have won just one game in their last eleven outings in all competitions. Potter’s side proved they are up for the fight in terms of Premier League survival last time out at West Ham UNited, with two late goals to salvage a 3-3 draw at the London Stadium.

Watford boss, Nigel Pearson took over the reins at Vicarage Road back in December, and he has had immediate success with 14 points from his first seven Premier League matches, to pull the Hornets away from the relegation zone. Recent defeats to Aston Villa and Everton have dragged Watford back into the bottom three, so a victory here would be very welcome indeed.

Considering the high importance of this fixture for both teams, the game could become a dour affair with limited chances at both ends. Neither team dare not lose this contest for obvious reasons, and the Draw could well be the play in this game at 49/20 with Unibet. 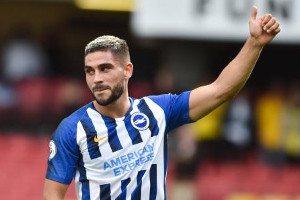 Neither of these two clubs have what you would recognise as a top Premier League marksman. Leicester City’s Jamie Vardy leads the way at the top of the Golden Boot list with 17 goals so far this season and by comparison, Brighton’s top scorer, Neal Maupay has seven league goals. Meanwhile Watford’s top scorer is Troy Deeney, who has just five Premier League goals to his name, in an injury-hit season.

Maupay leads the way in the First Goalscorer market with Betway at the top price of 9/2 to open the scoring, with his veteran team-mate, Glenn Murray narrowly behind at 5/1 with Unibet and 888Sport. Murray opened his Premier League account last weekend at West Ham, and he will be hoping to add to his tally here.

Unibet and 888Sport are offering some market value on Deeney, with those layers pricing up the Watford striker at 23/4, while the likes of William Hill and Coral are offering just 4/1 on the 31-year old forward.

Iranian forward, Alireza Jahanbakhsh hit a purple patch over the recent festive period with goals against Bournemouth and an incredible overhead kick against Chelsea. The 26-year old is a 15/2 chance with Unibet and 888Sport to score first here.

Former England striker, Danny Welbeck returned to the pitch last weekend against Everton, following a long injury absence, and the 29-year old could be given a starting role in this game by his boss. The 8/1 on offer with Betway and 888Sport could well be reasonable value if Welbeck is in the starting eleven.

A couple of others to consider at bigger odds include former Rennes winger, Ismaila Sarr who could pop up with a goal at 9/1 with Unibet and 888 Sport once again. Brighton’s attacking midfield man, Aaron Mooy sealed a permanent move in the January transfer window from Huddersfield Town, and the Australian could be of interest to some punters at 11/1 with Unibet and 888Sport yet again.

After my previous statement suggesting that this game is likely to be a tight affair, the bookmakers tend to agree considering the price available on Both Teams to Score. SportingBet offer 5/6 for each team to find the net in this game, and that is a bet worthy of consideration, but perhaps not to get heavily involved in. The alternative side is even money for both teams not to score, and that can be backed with Coral and Betfred.

Under 2.5 Goals is my idea of a solid bet for this game, and this can be backed at 5/6 with Betway if our belief of this contest being a close and drab affair comes true. For those who believe that goals are on the agenda in this game, then Over 2.5 goals can be backed at even money with William Hill and SportingBet.

Our Correct Score offering for this game is a 1-1 draw, which can be taken at the best industry price of 23/4 with SportingBet.