Please keep in mind that all odds mentioned are accurate at the time published on 30/06/2020 1:10 pm and are likely to change. 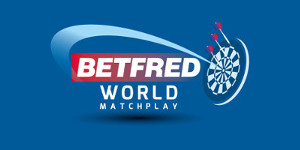 Darts has been doing its best to keep us entertained with some interesting home tournaments but in July, the action returns for real. Tungsten fans will be anxiously waiting for the start of the World Matchplay which goes off this year at the Winter Gardens Blackpool.

This will be the 27th edition of the tournament which is a long event, taking place across eight consecutive days so there’s lots to enjoy and a number of markets to consider from a betting perspective.

This year’s World Matchplay gets underway on Saturday July 18th and it will conclude, eight days later on Sunday the 26th. 32 players will be taking part with the top 16 from the PDC Order of Merit gaining automatic progression. The remaining 16 will arrive via the Pro Tour qualifying route.

The tournament will be played as a straight knockout, starting with a best of 19 leg format in the first round. The length of the matches increases until we get to the final which is a best of 35 affair. Matches have to be won by two clear legs and there is a provision for six extra legs to be played. If those legs are used up and we still don’t have a clear winner, a final tie breaker will be put in place.

Rob Cross enters this year’s World Matchplay as the defending champion after ‘Voltage’ defeated Michael Smith 18-13 in 2019. The very first edition, held in 1994, was won by the American darter Larry Butler – a journeyman player who produced something of a shock result.

Following Butler’s success, the World Matchplay settled into a rather more predictable rhythm as the great Phil Taylor started to dominate. The Power won the 1995 edition and would go on to complete an incredible 16 World Matchplay titles. The only other players to win more than once are Michael Van Gerwen and Rod Harrington who have each claimed the trophy twice.

Along with Van Gerwen, the remaining current players to have won the World Matchplay are Gary Anderson and James Wade. That’s your history and format so who is in the frame for the 2020 renewal?

Two-time winner and currently the best player in world darts, Michael Van Gerwen is the favourite to claim his third World Matchplay title. MVG can be backed at 7/4 with most bookmakers including 10Bet and Ladbrokes.

Van Gerwen was also a runner up to Taylor in 2014 but it might just be worth remembering that his last appearance in the final came in 2016. Since then, Rob Cross and Gary Anderson have been triumphant so we can certainly consider the chasing pack.

Behind the market leader, current World Champion Peter Wright is second favourite at best odds of 6/1 with SportingBet and the tournament sponsors BetFred. Just behind is Gerwyn Price at a best of 13/2 with VBet while Nathan Aspinall is at 9/1 with Coral and Sportnation. Snakebite Wright lost out in the final to Phil Taylor in 2017 and was the form man before the sporting world ground to a halt in March.

Aspinall is the rising star of the game while the competitive Price is a threat in any tournament. Any of those three can deliver at good value prices.

Also included in the chasing bunch is 2018 World Matchplay Champion Gary Anderson who can be claimed at best odds of 14/1 with Ladbrokes and SportingBet. Last year’s runner up Michael Smith is marginally further back at 16/1 with 10Bet and SportPesa and then we come to Glen Durrant and Rob Cross who can both be picked up at a top industry price of 25/1. Durrant has crossed successfully over from the BDO while former World Champion Cross’ inconsistency at the highest level sees him drift to the edge of the chasing pack. Durrant can be claimed at 25/1 with BetFred while Cross is listed at the same figure with SportingBet.

With 32 players involved, there may not be scope for a high priced winner in Blackpool but there are some interesting options for an each way punt at the very least. Daryl Gurney and Dave Chisnall can both be taken at best odds of 40/1 with Coral and BetFred while former World Matchplay Champion James Wade is down at a top price of VBet and SportingBet.

Adrian Lewis reached the final here in 2013 and, with Jackpot just starting to show glimpses of the form that made him a double World Champion, there may be some interest in his best odds of 100/1 with Ladbrokes and Coral.

It could be tricky to identify a winner after such a long break from the sport. Certain players have been maintaining some competitive form in the home tournament but it’s going to be a whole lot different when they step back up on the tournament stage.

In these circumstances, we can really only go looking for quality and, while this is an obvious tip, the name that stands out is that of Michael Van Gerwen. We don’t like to back favorites but it’s worth recalling that MVG was frequently an odds on pick when he was dominating the sport a couple of years ago. 7/4 is, therefore, a reasonable price and, with no short format early rounds, the shock results tend to be rare in this tournament.

Of the chasing pack, Gerwyn Price always gives punters a chance and the Iceman would be our best hope from behind the favourite. VBet aren’t offering each way terms with their industry best of 13/2 but you can claim an E/W bet on Price at 6/1 with most bookies including Coral and Ladbrokes.

That looks a good option as we take a relative step into the unknown but whatever happens, it’s just great to have darts back on our schedules.