Please keep in mind that all odds mentioned are accurate at the time published on 09/05/2018 12:45 pm and are likely to change.

The upcoming three-day meeting at the Cheshire venue hosts several important races that will yield plenty of clues for Group races further in the season, but the handicap highlight is undoubtedly the Chester Cup on Friday afternoon, scheduled to commence at 15:35.

For some of our readers who are not aware of the intricacies of the Chester track, it is unique due to the tight nature of its size. The full circuit is just 1800m in distance which is the smallest significant racecourse venue in England. Chester is a left-handed track with a finishing straight of just over one furlong, so it is very difficult for horses to win from off the pace.

Racing at Chester dates back to the 16th century, on the banks of the River Dee. The Chester Cup has been one of the long-standing races at the venue, with its inauguration dating back to 1824. The race distance has changed several times in its existence, but since 1994, the Chester Cup has been raced over two miles, two furlongs and 117 yards – just over two circuits of the track.

Two main things to consider before placing a wager in the Chester Cup: Firstly, wait until the final declarations are announced for the race on Wednesday. Plenty of bookmakers are willing to take ante-post bets and gobble up all the money if your selection does not run on the day – don’t give them the opportunity, even if it does detract from the early odds of your pick.

Secondly, the draw is hugely important due to the tight track. Horses drawn low have held sway – meaning they can save ground and get good early positions in the race. 11 of the last 16 winners came from stall 7 or less, which is very significant before deciding on any wager.

Montaly, trained by Andrew Balding took the 2017 renewal of the Chester Cup, but cannot enter this years’ race due to his rise in the weights since. The 2018 feature is – as always – very difficult to predict, but here below, we will look at some of the contenders of this tricky handicap event.

Dr Marwan Koukash is famous for his controversial former ownership of Super League’s Salford Red Devils, but is also a very prominent horse racing owner, especially with his infatuation for runners at Chester racecourse. Koukash has owned three previous winners of the Chester Cup and his Magic Circle, trained by Ian Williams currently heads the ante-post betting at 8/1 with SportingBet.

Magic Circle was last seen back in October in the Cesarewitch at Newmarket and following that moderate run was dropped one pound by the handicapper. 13 of the last 16 winners were rated between 93-99 and although Magic Circle is currently rated at 101, he is definitely a horse to consider for the shortlist as he ticks many of the boxes required to win this competitive handicap. 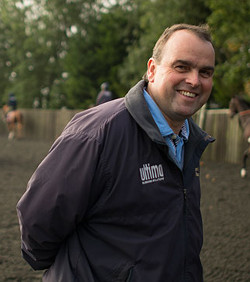 National Hunt trainer, Alan King has been known to plunder flat racing’s major handicap races in the past, and his charge, Who Dares Wins could prevail under leading jockey, Ryan Moore. Ladbrokes and Coral has the dual purpose six-year-old as a 6/1 chance, while Sun Bets offer the best industry price of 9/1 at the time of writing.

Who Dares Wins has kept his fitness high after sound appearances at the recent Cheltenham and Aintree Festivals, but some of his best form has come from his ventures into staying handicaps on the flat. Provided the draw is kind, Who Dares Wins has the urgings of arguably the best jockey on the planet and has obvious strong claims on its best form.

The Phillip Kirby-trained Stargazer was disqualified into second place after passing the winning post first on his last run at Newcastle, but the talented five-year-old must prove his stamina in this marathon event. Stargazer is a generally available 8/1 shot and has shown marked improvement over longer distances. If the son of Canford Cliffs does find the extra two furlongs is within his compass, then Mr Kirby could be gaining significant recompense following the previous demotion.

Dubawi Fifty has seen plenty of recent ante-post support, and it is fairly obvious to see why. His eye catching fourth-place finish in the Cesarewitch has been backed up with some solid efforts on the All-Weather over the winter. Dubawi Fifty has the class and potential for further improvement in long-distance handicaps, while the booking of Silvestre De Sousa is another plus and looks good value at the widely available odds of 10/1.

At 20/1 with Sky Bet and Betway, Prince of Arran is one of the classier individuals to line-up in this seasons’ Chester Cup. The Charlie Fellowes trained five-year-old has had a good stint at Meydan over the winter, including a decent staying on effort finishing five lengths behind top class stayer Vazirabad over two miles. A similar performance here could see Prince of Arran outrun his large ante-post odds.

An incredibly tough race to predict: At the time of writing, all bookmakers are offering each-way bets of ¼ the odds for the first four places. Some firms will offer further enhancements leading up to the race, so keep an eye out.

Of the five horses mentioned above, I would put forward two, both as each-way selections. Firstly, Dubawi Fifty at 9/1 looks to have rock-solid credentials to run a good race. He has a handy weight and the urgings of Silvestre De Souza is an obvious plus.

Prince of Arran has to carry 9st 9lbs at the current weights and with victory on Friday it would be the highest weight carrying performance since Rainbow Hill raced to glory under 9-13 back in 2001. My view is the horse is over-priced on his best form and is worthy of an each-way nibble at 20/1.