Can the Europeans Dominate? A Look Ahead to the 2018 Breeders’ Cup

Please keep in mind that all odds mentioned are accurate at the time published on 31/10/2018 2:15 pm and are likely to change. 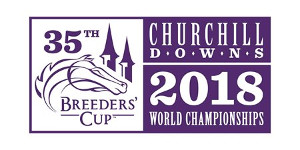 Churchill Downs is predominantly thought of in American horse racing terms as the host venue for the annual Kentucky Derby. For the first time since 2011, the Louisville track will open its gates this Friday and Saturday to host the 2018 Breeders’ Cup, which is the highlight of the world racing calendar.

The finest equine talents from all over the globe will converge to Churchill Downs to chase racing immortality – a victory against the very best opposition on the biggest stage of all. Fifteen races spread over the two days – including fourteen Group 1 events, highlights the standards of the meeting.

With over $30m in prize monies to compete for, it is no surprise to see the best of the best take each other on to prove who is the greatest of their generation.

The Breeders’ Cup was inaugurated back in 1984 and was a single day event until 2007, when the second day (Friday) was brought in. For the 2018 event, the Friday card will be known as “Future Stars Friday” and will feature five races for two year olds on the six race card, including the new Breeders’ Cup Juvenile Turf Sprint, with The Distaff moving back to the Saturday.

A maximum of 14 runners are allowed in each of the Breeders’ Cup Championships races. The organisers – Breeders’ Cup Limited – has adopted a field selection system to select runners in the events where races are oversubscribed. Winners of one of the 71 “Win and You’re In” Breeders’ Cup Challenge races across the globe automatically qualify.

Other pre-entries are ranked by a point system for graded race performances during the year while the judgment of a panel of racing experts is also used. After pre-entries are taken approximately two weeks before the Breeders’ Cup, the ranking determines eligibility in oversubscribed races. After pre-entry, any vacancies in the fields are filled by horses in order of panel preference. 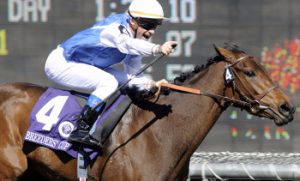 Of the 305 Breeders’ Cup races since its inception, European trained-horses have claimed 54 victories, which equates to a 17.7% strike-rate. The likes of Goldikova, Ouija Board, High Chapparal and Conduit all claimed multiple wins at the Breeders’ Cup over the years for our continent, and in this article, we will look at some of our leading contenders aiming to strike against the rest of the world, in the biggest race meeting the globe has to offer.

The opening race of the meeting kicks-off at 7:21 GMT on Friday evening with lots of hopes for a European winner. Soldier’s Call trained by Archie Watson and the Aidan O’Brien pair of Sergei Prokofiev and So Perfect are at the head of the current ante-post betting markets. American hopes are likely to reset with Royal Ascot winner, Shang Shang Shang trained by leading sprint handler, Wesley A Ward.

Shang Shang Shang has not run since her Ascot exploits in the Norfolk Stakes, and is definitely worth an each-way interest at 8/1 with Ladbrokes and Coral. Of the European team, Sergei Prokofiev looks to hold solid claims, provided his recent Newmarket win has not left any marks at 9/2 with Coral.

Aidan O’Brien’s best chance of a winner on the opening day of the Breeders’ Cup meeting could well rest with his two year old colt, Anthony Van Dyck. The mount of Ryan Moore is a generally available 11/4 chance with various bookmakers including 888Sport to regain the winning thread.

His main rival looks to be from within Europe however, with the Godolphin-owned Line Of Duty, trained by Charlie Appleby at a freely available 7/2 with most layers. Anthony Van Dyck finished four lengths behind the potential superstar, Too Darn Hot at Newmarket last time out, which is credible form.

However, Godolphin could have his measure with Line Of Duty, considering Appleby’s other charge, Quorto, lowered the colours of the Coolmore horse at the Curragh back in September. Line Of Duty has to improve on official figures, but the team at Godolphin must surely believe it is possible, otherwise he wouldn’t travel.

This meeting has the potential to be a red-letter weekend for Godolphin and Charlie Appleby, with leading hope Wild Illusion looking to be one of the best hopes of a British winner of the whole meeting. A best price of 5/2 with MarathonBet for the son of Dubawi looks to be a fair price, considering his improving profile.

Wild Illusion has already seen off the Irish hopes of Magic Wand before, and while the American contingent is not too easy to assess, it is Sistercharlie, trained by Chad C Brown, who could well pose the stiffest test. The four-year-old has mopped up Group 1 races at Saratoga and Arlington over the summer, but needs to prove her worth over the extra furlong. Wild Illusion has the stamina required I feel however, and looks to be a solid bet.

The Breeders’ Cup Mile is synonymous with France, and one Frenchman in particular, Freddy Head. The jockey-turned trainer has won this race twice as a jockey with Miesque (1987-88) while Goldikova was his star miler as a trainer from (2008-10) as the star filly rattled in three successive victories in this race.

This time around, Head saddles up Polydream, who looks to have solid claims to enhance the love affair further with this race. Polydream is a best priced 11/4 chance with Coral and 888Sport at the time of writing, and if you can draw a line through her poor effort at Longchamp last time out, then the daughter of Oasis Dream surely has a big chance.

This race is often littered with hopes from this side of the Atlantic Ocean, and the 2018 renewal is no exception. Eight of the intended 14 runners are from European-based trainers. Sir Michael Stoute sends over Expert Eye to be ridden by Frankie Dettori, who will be looking for his 13th Breeders’ Cup victory in an outstanding career. Dettori previously won this race on Barathea for Luca Cumani back in 1994 as a sign of his longevity. At a readily available 7/1 with most bookmakers, Expert Eye should make the frame at least.

According to the ante-post betting, this race looks to be a ‘penalty-kick’ for John Gosden’s all-conquering mare, Enable. The four-year-old is the prohibitively short-priced 4/7 favourite to dazzle the American audience, as she has so successfully done in Europe. Her list of opposition consists of fellow European candidates that the mount of Frankie Dettori has already beaten in her career.

What concerns me is how much was taken from the tank following her second victory in the Arc at Longchamp last month. While this race is a priority, it is surely not the most important engagement of her season, and the odds are prohibitive, despite her obvious talent.

I cannot find a definitive horse to beat Enable however, so this race will – for me at least – be a race to watch and savour, and hope Enable can maintain her lofty reputation.

Once again, this years’ Breeders’ Cup has many races to savour this weekend, and it will be a joy to watch and see how our European stars fare against the rest of the world, at one of the greatest horse racing venues anywhere around the globe.

The Europeans look to have a strong team to send over the Atlantic this year, and hopefully will have multiple winners. Of those, my beliefs are that Wild Illusion and Polydream have the most likely chances of victory at odds-against. Enable will hopefully add to the tally, but her prohibitive odds tempers my enthusiasm of a bet, considering my reasoning above.

My advice is to sit back, relax with your favourite beverage and enjoy some scintillating racing action.