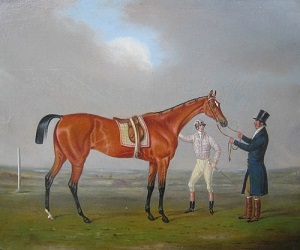 The second leg of the Fillies’ Triple Crown series takes place at Epsom on Friday afternoon – 16:30 start – in what looks to be a very open affair.

Thirteen fillies have stood their ground at the latest declaration stage, but with the decision of 1000 Guineas winner Billesdon Brook to head elsewhere for her next run, it gives opportunity for others in Epsom’s blue riband event over twelve furlongs.

The Oaks is the second oldest Classic race after the St. Leger and is the third of five British classics in the horse racing calendar. The race was given its name after a local Epsom estate called The Oaks, what was leased by The Earl of Derby in the late 18th century. The Oaks has gone through many weight changes since the race’s inauguration back in 1779, but since 1892, each horse has carried the current weight of nine stone.

For anyone who wishes to place their bets before the final declaration stage on Wednesday, please be aware that very few bookmakers are currently offering Non-Runner No Bet on this race. Therefore, if you wish back any horse before the final declarations are announced, please check with your preferred bookmaker on this concession, otherwise you will lose your wager if the horse does not run in the race on Friday afternoon.

In this article, we will look in more detail at some of the leading contenders of this female classic, to try and point our readers in the right direction for a winning bet.

Of the 13 runners who currently stand their ground for the 2018 Oaks, Irish super-trainer, Aiden O’Brien has eight involved. All eight are unlikely to participate in Friday’s feature race, which darkens the water somewhat.

We suspect that eight will turn into four or perhaps five come race day, and three of the most likely runners include, Magical (5/1 generally available), Magic Wand (8/1 with Sun Bets and Boylesports) and Bye Bye Baby as a widely available 9/1 shot.

The strength of Magical’s form took a dent on Sunday with the defeat of Irish 1000 Guineas favourite Happily at the Curragh. Magical and Happily met twice last season with each filly claiming the spoils. Magical won the Group 2 Debutante Stakes at the Curragh last August, while her remaining races of 2017 can be ignored.

Her relatively close-up fourth in a Group 3 race at Longchamp over a mile back in April should have put Magical in tip-top condition for Epsom and a bold bid can be expected.

Magic Wand is one of the O’Brien charges who has the least to prove regarding stamina, as the daughter of Galileo powered to victory in the Cheshire Oaks earlier this month. Magic Wand follows the path of Enable who also won at Chester before claiming the Epsom showpiece. Official form figures suggest that Magic Wand still has to make significant improvement to feature in the finish at Epsom, although the filly is on the upgrade and respected.

Bye Bye Baby took the scalp of a well-regarded Dermot Weld inmate to claim a recent Group 3 race at the Curragh over twelve furlongs, on testing conditions. Bye Bye Baby made all in the race and quickened nicely at the business end to repel all challengers. Her form is rather patchy however, so she would not be the most solid proposition.

Wild Illusion, trained by Charlie Appleby for the huge Godolphin operation is the current ante-post market leader of The Oaks at 4/1 with MarathonBet and SportPesa. Wild Illusion finished in a close-up fourth place in Newmarket’s 1000 Guineas, with a step-up to twelve furlongs expected to suit.

A Group 1 winner in the Prix Marcel Boussac at Chantilly, over a mile last season, Wild illusion performed admirably considering she was thrown into strong company last time out, and is likely to have a big say here, with the step up to a mile and a half expected to suit on breeding – especially on her dam side.

Sea The Stars was one of the most decorated equine stars in recent memory, and it is his progeny, Sea Of Class who is bidding to give William Haggas his first Oaks winner since 2011. With only two runs under her belt,

Sea Of Class showed her talent with a taking performance in a Listed win at Newbury over ten furlongs and the current odds of 7/1 with Sun Bets and Boylesports are of interest provided she is an intended runner.

Perfect Clarity (10/1 generally available), trained by Clive Cox is also worthy of mentioning, having performed admirably by taking the Lingfield Oaks trial last time out. She has still plenty to find officially to make her mark in the Epsom classic, but the manner of her victory suggested there is plenty of improvement in the locker and she deserves to take her chance.

This is one of the most open renewals of The Oaks in recent memory and as such, it makes it a difficult race to call. However, I’m prepared to frontup with two selections for the race – Wild Illusion has leading claims following her strong effort in the 1000 Guineas, and provided she takes the undulations of Epsom in her stride, the step up in trip is likely to suit.

An each way plunge is taken on Magic Wand, who has little to no issues regarding stamina for this race. Her impressive win at Chester on her last start was very visibly eye-catching and the daughter of Galileo is likely to be running on at the finish when others are begging for mercy.