Please keep in mind that all odds mentioned are accurate at the time published on 19/12/2018 11:56 am and are likely to change. 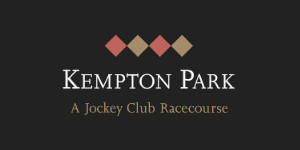 The countdown is now in full swing to the festive season, and once the Christmas Day meal has been quaffed, there will be lots of sport hungry punters looking at their race cards to pick out the winner of the big event at Kempton on Boxing Day.

The King George VI Chase is the racing highlight of the Christmas National Hunt calendar. Racegoers will flock in their thousands to the south-west London track to revel in the Christmas spirit – and hope to back a few winners along the way!

The King George VI Chase is a Grade 1 steeplechase, raced over a distance of around three miles and during its running there are eighteen fences to be jumped.

First run in February 1937, it was named in honour of the new British monarch, King George VI. It was only run twice before World War II, during which Kempton Park was closed for racing and used as a prisoner-of-war camp. After the war the racecourse re-opened, and the event returned in 1947 on a new date – Boxing Day.

The King George VI Chase is part of the National Hunt Triple Crown which entails the Betfair Chase, won by Bristol De Mai – back in November – and the Cheltenham Gold Cup to be raced in March 2019. Bristol De Mai is likely to return at Kempton for this race to attempt the chance of a £1 million bonus for winning the three biggest chase races in the jumps’ season.

Some of the greatest jump stars have claimed this big race down the years including, Desert Orchid, who won it four times and Kauto Star who won it five times in their glittering careers. Last season’s winner, Might Bite, trained by Nicky Henderson will look to repeat his blistering efforts of last season.

In this article, we will look at several of the main protagonists for this year’s high-profile race to try and point our readers in the correct direction for their wager. 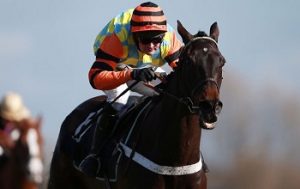 The current ante-post odds show that Might Bite is the 3/1 market leader with 888Sport for this season’s King George, but is he worthy of such high acclaim? The now nine-year-old chaser won this race last year by just one length from 50/1 shot Double Shuffle and has since had his colours lowered at the Cheltenham Festival by Native River and has to put aside a poor run first time out in Haydock’s Betfair Chase, trailing in almost 30 lengths behind Bristol De Mai.

Those are the negatives. The opposite side of the discussion is that Might Bite idled strongly in front last year at Kempton and was worthy of far more than the actual winning distance if he had any serious challengers. Kempton is the speed track that suits his free-going style better than anywhere else, and in my view, the son of Scorpion deserves another chance. It is also conceivable that Might Bite was not fully tuned up for his Haydock reappearance and we could see his true form once again on Boxing Day.

Ruth Jefferson’s stable star, Waiting Patiently is one of the leading candidates to claim the spoils in this race this season. Unbeaten in six chase starts, Waiting Patiently grabbed his first taste of Grade 1 glory last season by claiming the Ascot Chase, with 2015 King George winner Cue Card trailing in his wake.

At 11/2 with 888Sport, Waiting Patiently is an obvious each-way play provided that the race does not cut up to less than eight runners on Boxing Day. We are yet to see the absolute limit of the seven-year old son of Flemensfirth’s obvious potential. The only real concern is if Waiting Patiently can see out the extra three furlongs he will encounter at Kempton for the first time in his career. 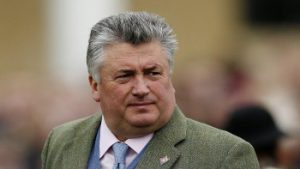 Leading National Hunt trainer Paul Nicholls knows exactly what it takes to win the King George, considering he has saddled up nine previous winners of the race since See More Business gave the Ditcheat handler his first win back in 1997. Nicholls is likely to be double-handed in the race with Politologue – 6/1 with Betfred – along with Clan Des Obeaux, a 25/1 chance with the same two firms.

We will focus on Politologue, who has leading claims in the race, if he can stay the required distance. The seven-year-old has been campaigned over two miles earlier in his career, but has always been a horse of great potential. That ability is showing over longer trips, with Politologue putting up a career-best in taking the Grade 2 Christy 1965 Chase at Ascot last month. He, like Waiting Patiently, needs to prove his stamina in the race, which is the only real negative of a perfect ten for Nicholls.

It might be slightly strange to read that the highest rated horse in this race is a 7/1 chance with the likes of William Hill and Ladbrokes so why is the reigning Gold Cup champion so unfriendly in the market?

The main reason is that Kempton is a ‘right-handed track’ and this could be a reason that Colin Tizzard’s leading horse could even miss the race. Native River has only run right-handed once in his 22 career starts, which ended in a poor effort at Kempton back in 2015. It will be interesting to see if Native River takes his chance on Boxing Day, and if he does line-up, then connections of the horse obviously believe he will run well.

Bristol De Mai seems as though he will be an intended runner for the King George following his excellent performance in Haydock’s Betfair Chase last month. Bristol De Mai passed the winning post four lengths ahead of Native River and if he can repeat that performance, his odds of 15/2 with 888Sport could look rather silly.

Trainer Nigel Twiston-Davies must find the key to unlock Bristol De Mai’s excellent Haydock form to other tracks however, and that is the core reason why his odds are so currently generous. The 20-odd lengths that he beat Might Bite by in the Betfair Chase was reversed in last years’ King George, so it would take a huge turnaround in course form for Bristol De Mai to reach the Cheltenham Gold Cup with the opportunity of the £1m bonus.

When looking for the winner of the King George, the sensible option is to look towards an experienced horse, who has already won at Grade One level – and is relatively short in the betting. Form tends to hold up year on year in the race, so Might Bite at 3/1 with 888Sport is the obvious choice to repeat his victory from last season. Such is his ability when on song, he is deserving of another chance following a poor Haydock run.

An each-way play is taken with Waiting Patiently at 11/2 with 888Sport, provided the race is of eight runners or more. As previously stated, nobody truly knows the ceiling of this horse as yet and he can be backed as a bet to nothing at the prices.
Best Bets: