Please keep in mind that all odds mentioned are accurate at the time published on 11/09/2019 8:31 am and are likely to change.

At the recent five-day declaration stage on Monday lunchtime, just eleven contenders stood their ground to be the winner of the 2019 St Leger at Doncaster racecourse on Saturday afternoon., with the race due off at 15:35 BST.

Doncaster, who hosts its four-day St Leger meeting from Wednesday onwards has seven Group races, commencing from Thursday to the culmination of the top-class action on Saturday, but the obvious highlight is the last Classic horse race of the British flat racing calendar at the Town Moor venue.

This year’s renewal has no Triple Crown bids following Magna Grecia’s victory in the 2000 Guineas, and Anthony Van Dyck claiming this season’s Derby. Neither of those horses are in the reckoning for this race, but there are plenty of quality animals around in this competitive Group 1 race as you would usually expect.

In this betting preview, we will look at some of the main contenders in greater detail of this prestigious horse race, to try and point our readers in the right direction for the winner on Saturday afternoon.

Has Gosden the answer with Logician?

From a purely English training perspective, John Gosden is the leading player in the flat racing scene with some of the finest horses in training at his all-conquering operation at Clarehaven Stables. The veteran handler boasts the likes of Enable, Stradivarius, Cracksman and Too Darn Hot to mention just four of the leading lights within his training compass.

Gosden also has the luxury of Frankie Dettori as his stable jockey, who is arguably riding at the absolute peak of his incredible career, and this partnership has struck on so many occasions in the very biggest races since it began.

The pair will link up once again with Logician, who is the bookmakers’ favourite to win the 2019 St Leger at the generally available price of even money at the time of writing. Logician was not seen as a two-year old but is unbeaten in four races so far this season, with the highlight being a dominating performance to take the Group 2 Great Voltigeur Stakes at York last month, with potentially two rivals re-apposing in Norway and Nayef Road, who finished eight and twelve lengths behind the winner.

Dettori has already won twice on Logician, which is an obvious plus. The progeny of Frankel has shown significant improvement this season for the extra step up in distance, and the extra two furlongs is not expected to be any real hindrance. The odds of even money will not be the most lucrative winner for the average punter, but Logician is very likely to be at the sharp end of the race in the dying strides to the winning post.

Of the 11 potential runners at the five-day declaration stage, Aidan O’Brien has six of the entrants remaining. Sir Dragonet, Il Paradiso, Norway, South Pacific, Barbados and Western Australia complete the sextuplet of entrants who could potentially give the Coolmore operation the hat-trick of English Triple Crown races this season, following the victories of Magna Grecia and Anthony Van Dyck earlier this season.

It is highly unlikely that all six of the O’Brien contingent will run, so we will mainly look towards the two most plausible options in Sir Dragonet and Il Paradiso.

Sir Dragonet, similarly to Logician was not seen on the racecourse as a two-year old and also has had the four runs so far this season. He won his maiden at the rewarding odds of 14/1 at Tipperary, then spread-eagled the field to take the Group 2 Chester Vase at Chester to put the son of Camelot firmly in the picture for Epsom Derby considerations.

After being sent off as the 11/4 favourite for the Blue Riband event, Sir Dragonet finished the race in fifth place, but was overtaken by three horses in the final strides of the race. On the basis of form lines, this is arguably the best piece of form on offer – especially considering Japan’s exploits following The Derby in capturing three Group races and taking down superstar Crystal Ocean on his latest start.

Sir Dragonet is a best-priced 7/2 chance with Coral and SportingBet to win the St Leger on Saturday. The pecking order has obviously yet to be decided as to which jockey will be onboard their intended runners at Ballydoyle, but my suspicion will be that Ryan Moore is highly likely to take the ride on Sir Dragonet to assume he will be their first choice. If that assumption proves to be correct, then the current ante-post odds are likely to contract significantly.

Il Paradiso was last seen finishing under two lengths behind Stradivarius in the Yorkshire Cup over two miles at York last month, which proved the offspring of Galileo will have no stamina concerns for this lesser distance on Saturday.

Stradivarius was giving his rival a significant lump of weight away on that occasion, and now Il Paradiso must now go to war with the big boys off a level weight allowance. His last two outings over two miles have suggested that Il Paradiso deserves to be in this company now and can make his presence felt. The 6/1 that is currently on offer with William Hill and Betfred is decent value in my view, from an each way perspective at the very least. 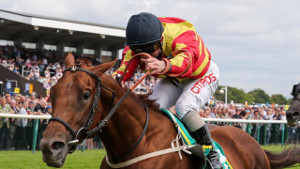 Travelling back over the Irish Sea, the English contingent have a pair of longer priced contenders in Mark Johnston’s Sir Ron Priestley and the Martyn Meade-trained Technician.

Firstly, Sir Ron Priestley has won five of his six outings this season – albeit at a lower level of racing in comparison to the Group 1 that the son of Australia will be taking on this weekend, but he deserves his place in the field. If there are any chinks in the armour of the contenders at the head of the betting, then Mark Johnston could have his third Classic winner of an illustrious career. Betway and William Hill offer the top price of 10/1.

Technician is probably a level below what is required to win a race of this nature, but he showed his recent wellbeing by taking the Group 2 Geoffrey Freer Stakes at Newbury last month over a similar trip to Saturday’s event.

If the going turns softer over the next few days, the extra rain could well be a plus for the Martyn Meade-trained son of Mastercraftsman, who loved the easier surface last time out. At the top price of 14/1 with Coral, Technician could spring a surprise.

The significant influx of Aidan O’Brien horses at the five day stage murk the waters in making a solid opinion on who can get their head in front for Saturday’s big race. However, narrow preference is for Sir Dragonet who can gain compensation for his Derby fifth placed effort.

The highest rated horse on official figures can get the job done at the expense of Logician and Il Paradiso. A small saving bet should be placed on Sir Ron Priestley at 10/1 however, as he could potentially outrun his odds.