Please keep in mind that all odds mentioned are accurate at the time published on 28/11/2019 12:55 pm and are likely to change.

Last weekend’s National Hunt racing action was one to savour, with the highest rated jumps horse in training, Cyrname, taking down the colours of the previously unbeaten Altior at Ascot, along with Lostintranslation, who claimed the Betfair Chase at Haydock to catapult Colin Tizzard’s stable star to the head of the Cheltenham Gold Cup ante-post market.

Newbury hosts its two-day fixture beginning on Friday afternoon, but our focus is on the Ladbrokes Trophy Handicap Chase on Saturday afternoon, with a post time of 15:00 GMT. At the initial five-day declaration stage, 26 potential runners stand their ground, but with a maximum of 24 runners, a pair of horses will sadly miss out.

This race is often earmarked as a great opportunity for horses who have just lost their Novice Chase Status from the previous season. It’s also a race which throws up future superstars in abundance, so for me this is the single greatest handicap of the season and always a hugely competitive affair.

Colin Tizzard also had significant success in this race last year as his Sizing Tennessee won the race with Elegant Escape – also trained by Tizzard – as runner-up. The winner is not entered this year to try and double up at Newbury, but Elegant Escape is hoping to go one better for his trainer and connections.

This race was first competed for back in 1957 as the Hennessy Cognac Gold Cup, and it was initially staged at Cheltenham. The winner of the inaugural running, Mandarin, was owned by Peggy Hennessy, a member of the family which founded Hennessy, the race’s sponsoring company.

It was transferred to Newbury, just three years later, and won by Mandarin for a second time in 1961. The race’s second running was won by Taxidermist, ridden by the amateur rider John Lawrence, later Lord Oaksey, who was the breeder and part-owner of the 2011 winner, Carruthers.

This Grade 3 event is raced over three miles and two furlongs, with 21 fences to be jumped. With a total prize fund of £250,000, there is significant interest from both sides of the Irish Sea for this hugely prestigious event.

In this article, we will look at some of the leading contenders of his high-profile race, to try and point our readers in the right direction for a winning selection. 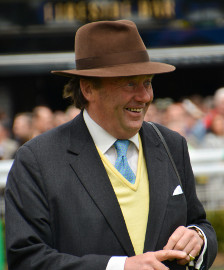 Legendary trainer, Nicky Henderson has won the Ladbrokes Trophy on three previous occasions, and his Ok Corral is the current ante-post market leader, and he will be looking to make it win number four for the Lambourn handler.

Ok Corral was likely to be ridden by stable jockey, Barry Geraghty, but the Irishman is otherwise engaged in piloting Buveur D’Air in the Fighting Fifth Hurdle at Newcastle on Saturday afternoon, so Aiden Coleman will take the plum ride on the 6/1 market leader with William Hill.

The nine-year old was pulled up on his last start in the four-mile National Hunt Challenge race at the Cheltenham Festival last season, but this trip should be much more to his liking, and he has obviously been plotted up for this race by his trainer and connections. One word of caution would be that Ok Corral has not seen the racetrack this season so far, but Henderson is more than capable of getting any horse fit for the big day.

Queen to Strike for Mullins?

Total Recall struck gold in this race two years ago for Irish super-trainer, Willie Mullins, and his Cabaret Queen looks to have obvious similarities between Total Recall and Mullins’ chief hope this year. Cabaret Queen was an impressive winner of a competitive-looking Munster National last time out when drawing clear from the home turn to win by thirteen lengths.

Also, like Total Recall, Cabaret Queen had not been with Mullins for very long. Previously with Dan Skelton, Cabaret Queen had won her first two starts over fences for her former trainer, but her jumping lapses had been the main reason she hadn’t added to those successes.

However, she has been more polished in that department under the tutelage of Mullins, and with further improvement to come she could prove a different proposition on her return to British soil. Although all her previous wins had been on good ground, Cabaret Queen showed she handled heavy going last time, so any further rain shouldn’t harm her chances at the top price of 15/2 with 888Sport. 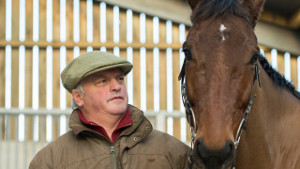 Colin Tizzard has four potential chances to claim the Ladbrokes Trophy this year with the likes of Elegant Escape, Robinsfirth and West Approach, but it is the chances of Mister Malarkey who catches my eye.

The six-year old was a hugely progressive novice last season, impressing with his jumping on this course prior to following up in Grade 2 at Ascot and then staying-on 4th in hot renewal of the RSA Chase at Cheltenham. His overall profile suggests it’s worth forgiving a poor prep run last time out, with this step up in trip is a big plus on pedigree alone.

Mister Malarkey is a generally available 8/1 chance with the sponsors, Ladbrokes, plus William Hill and Coral.

De Rasher Counter, trained by Emma Lavelle has seen some significant market support in recent days and only a few firms including William Hill and Ladbrokes have the seven-year old as a double-figure price at 10/1. Lavelle does very well with her team of horses and this second season chaser can make his presence felt.

Borice is another Irish raider, under the Gordon Elliott stable, and at 12/1 generally, the intended mount of jockey Daryl Jacob can be expected to run very well. Borice completed a summer hat-trick in the Galway Plate when in receipt of lumps of weight from runner-up Black Corton. It’s interesting that his trainer has kept him for this race, rather than one of Ireland’s staying handicap chases in which he has such a good record.

Others worth a mention include The Conditional – 20/1 with Coral – 16/1 with Betfred and Sport Pesa- who showed plenty of promise for Dan Skelton as a novice and returned from more than two years off the track with a good showing over hurdles at Wetherby earlier in the month.

A hugely competitive affair as you would expect from a minimum 6/1 market leader from a potential cast of 24 runners. My focus on this race is headed towards the Irish contingent, with Cabaret Queen looking to hold very solid claims. Jumping was once an issue for the former Dan Skelton inmate, but the transfer over the Irish Sea has alleviated those problems, and he can get the job done here at 15/2 with 888Sport.

Borice is a live danger to our selection for Willie Mullins’ main training rival in Ireland, and he is rated as a strong each way bet at the tempting price of 12/1 – generally available.