Please keep in mind that all odds mentioned are accurate at the time published on 01/10/2019 1:21 pm and are likely to change.

It’s been a slow start to the new Premier League season for Manchester United and their boss Ole Gunnar Solskjaer. Seven games into the new EPL campaign and the Red Devils sit in tenth place in the league and it’s already looking as though Champions League qualification is going to be a tall order.

Results in Europe and in the EFL Cup haven’t been too encouraging either so United will be targeting a positive outcome in the second round of Europa League matches. Standing in their way are AZ Alkmaar and the Dutch club will have some confidence of causing an upset.

There are odds against figures on all three possible results so there is the potential for some nice profits. Manchester United start as favourites at odds of 29/20 with Unibet and BetFred while victory for AZ can be claimed at 2/1 with Coral and Bethard. Completing the betting is the draw which can be picked up at best industry odds of 12/5 with BetFred and given the close nature of this market, there should be plenty of takers at that price.

In the first round of Europa League games, AZ drew away to Partizan Belgrade while United edged past Astana by the narrowest of 1-0 margins. It does all suggest a share of the points but before we make our verdict, let’s take a look at the men who are most likely to decide the destiny of this contest. 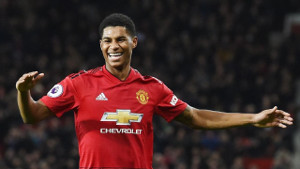 United’s Marcus Rashford was an injury doubt for Monday’s clash with Arsenal but the striker started the game and is now the favourite to open the scoring on Thursday night. Rashford can be picked up at best odds of 27/5 with 888Sport and Unibet while young Mason Greenwood follows at 23/4 with the same two bookmakers.

AZ Alkmaar’s first representative follows and we have Myron Boadu at 11/2 with Betway. Boadu is an 18 year old striker with a big future and he’s expected to be AZ’s main source of goals in this fixture. Next up is AZ’s Ferdy Druijf at 13/2 with Betway while the same bookie has that identical price available for United’s Paul Pogba.

A couple of long shots might involve Harry Maguire at 20/1 with Ladbrokes and Coral but a name that interests us is that of United’s Daniel James. The winger has made a strong scoring start since arriving from Swansea in the summer and he’ll attract lots of interest at a top price of 19/2 with Unibet and 888Sport.

In fact, let’s take the plunge and make James our first confirmed tip. We’ll play a little safer and take the 4/1 from 888Sport in the anytime market but that remains a good figure for one of Manchester United’s better players this season.

If we look at the form guide, we find that AZ Alkmaar are in good shape coming into this contest. The Dutch unit have won their last four games in domestic football and have scored 11 goals in the process. Interestingly, they’ve only let in one goal in that time but we feel that Both Teams to Score should be safe.

Partizan Belgrade breached the Dutch defence twice in the last Europa League game and United should provide an equally tough test. BTTS is quoted here at best odds of 14/19 with SportNation and Sport Pesa and while that’s not an exciting number, we feel it’s one of the more likely options.

Those stats also suggest we should see at least three goals in this game. Manchester United’s numbers aren’t quite as encouraging but Over 2.5 goals is a good alternative to Both Teams to Score and it’s currently available at a best of 66/67 with Bethard.

Finally, a Correct Score of 2-1 in favour of Manchester United is our instinctive verdict at a top price of 37/4 with Bethard again. It’s not been the happiest of openings for the Premier League side but this is one of those evenings where we suspect the gulf between English and Dutch domestic football will be key – just…