Please keep in mind that all odds mentioned are accurate at the time published on 07/12/2018 10:06 am and are likely to change.

It’s the battle of the blues this Saturday evening – Royal vs Sky Blue – as Chelsea look to try to be the first team to beat Manchester City in the Premier League so far this season as pace setters City travel to Stamford Bridge, in this eagerly anticipated clash.

Chelsea are licking their wounds following a midweek 2-1 reversal at Wolverhampton Wanderers, while Manchester City had the benefit of an extra day’s preparation for this contest, following their away victory at Vicarage Road.

If Maurizio Sarri’s side has any realistic aspirations of being in the title race in 2019, then this game is a must win fixture. Chelsea currently trail their upcoming opponents by ten points in the Premier League table, with another City victory here leaving Chelsea in the battle for the top four, at best.

The bookmakers believe Chelsea’s task to gain a vital home win at Stamford Bridge is a difficult one, as City are the overwhelming favourites to make it 14 wins from 16 Premier League games so far this season.

188BET offer the best available odds on Pep Guardiola’s men of 19/20 for the Sky Blues to continue their hugely impressive Premier League start. The Draw is on offer at 2910 with SportingBet, while a victory for the West Londoners can be taken at 29/13 with Unibet.

Reigning champions Manchester City will be hoping to repeat their 1-0 win at Stamford Bridge from last season, which came via a second half strike from Belgian star Kevin De Bruyne. City has an excellent recent record against Chelsea, having won the last three meetings between the clubs in all competitions, and they have not conceded a goal in the process.

It is fair to say that City have maintained their efforts of last season, while Chelsea have improved after their appointment of their new manager. Only Wolves and Liverpool have stopped Manchester City claiming all three points on their travels this season, and I don’t expect anything else than an away victory here. 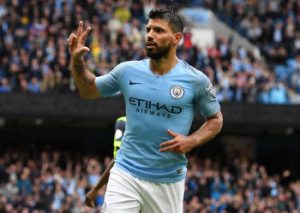 Manchester City striker, Sergio Aguero trails Pierre-Emerick Aubameyang and Harry Kane in the race for the Premier League’s Golden Boot, but he could move nearer to his rivals by scoring first here. Betway are the top price of 15/4 for the Argentinian hot shot to continue his fine scoring run.

Fellow City striker, Gabriel Jesus has been used sparingly in recent weeks, but Guardiola could opt to start the Brazilian star, perhaps in tandem with Aguero. Jesus can be backed at a generally available 9/2 with William Hill and Coral as examples.

England forward, Raheem Sterling is perhaps the value in this market as the City man has eight Premier League goals already this season, and is a 6/1 chance with SportPesa.

Chelsea’s first interest in the opening goal scorer market comes from Eden Hazard, a 13/2 chance with Betway. Hazard has undoubted quality and he can give any defence serious problems, so City will have to be on their guard to keep him quiet. Chelsea target men, Olivier Giroud and Alvaro Morata are both available at 15/2 with Unibet and 888Sport respectively, but it is highly likely that only one of the duo will start the game, so check the team news before placing any wagers here.

A couple of others to consider at bigger prices are Manchester City’s David Silva – who has looked unplayable at times this season. The Spanish midfielder is a best priced 21/2 with Unibet and 888Sport, and is a player at the top of his game currently. Chelsea’s English midfielder, Ross Barkley has popped up with a couple of crucial goals at specific times this season and is also worthy of consideration at 16/1 with SportingBet and BetBright.

Short-price punters will be tucking into the 11/18 on offer with 10Bet and SportPesa for Both Teams to Score in this game. It is a virtual guarantee that Manchester City will find the Chelsea net, but they often give several opportunities to their opponents – and Chelsea can capitalise, which makes this an obvious choice of bet – albeit at short odds.

With the BTTS bet in mind, our main offering for this game is for Manchester City to win the match with both teams scoring in the game. Betway offers the top price for this bet at the odds of 12/5. Chelsea simply have to go for Manchester City in this game because they have no alternative. It will make for an entertaining tie, I believe, but City are likely to win the battle and take the points back to Manchester.

As is often with these previews, we like to offer up a Correct Score bet for a small stakes option to give a nice reward if successful. Our selection for this game is a 3-1 win for Manchester City. 10BET and SportPesa are the places to find the best odds of 14/1.