The brief Christmas break is over and, with the field starting to thin out, the world’s best darts players are now heading back to Alexandra Palace for the conclusion of the 2018 PDC World Championship. We’re now at the third round stage, one step away from the quarter finals and the action becomes intense and dramatic as the final itself draws closer.

On Thursday, two of the biggest names in the sport take to the oche and while the bookies expect Gary Anderson and Phil Taylor to have easy rides, could there be an upset in store? 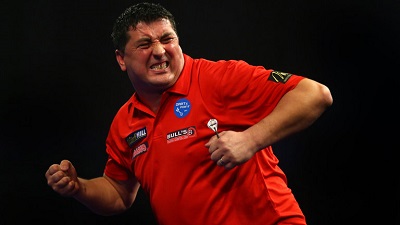 The night begins with the tie between Mensur Suljovic and Dimitri van den Bergh. The Austrian Suljovic was expected to get to this stage while Belgium’s Van den Bergh caused an upset in the first round with a 3-1 win over Stephen Bunting and has looked sharp ever since.

The betting isn’t exactly tight for this one with Suljovic the clear favourite at best odds of 8/15 with MarathonBet but some may be getting behind the outsider Van den Bergh at a top price of 7/4 with Betway and Coral. We agree with the bookies in this case but you could get some value in the Correct Score betting with Suljovic to win 4-2 which is available at a best of 4/1 with Sun Bets and BetBright.

Next up is the match between John Henderson and Rob Cross and, according to the bookmakers, this should be even more clear cut. Cross, like many before him, has switched from the BDO but unlike others he looks competitive at this level and at short best odds of 1/7 with MarathonBet, he should make short work of his opponent.

Henderson claimed the major scalp of Daryl Gurney in the last round and therefore is clearly a threat but he’s out at a top price of 6/1 with MarathonBet for this one and we think the bookies have got this one right. A correct score of 4-1 to Cross could be the way to go and that’s at a best of 27/10 with BetBright.

Now we come to the biggest games of the night and up first is Phil Taylor versus Keegan Brown. In his final tournament before retiring, Taylor looks to be peaking nicely having followed up a 3-1 win over Chris Dobey with a 4-0 whitewash of Justin Pipe.

However on Thursday, The Power should get his toughest test of the competition so far, even if the bookies disagree. We called the upset in the first round as Brown edged past the seeded James Wade and that was followed up by a 4-2 victory over Zoran Lerchbacher in round two.

Brown looks interesting at a best of 10/1 with MarathonBet based on those results but he hasn’t really been tested and his average of 87.65 last time out suggests that his price is right. Taylor at best odds of 1/12 with MarathonBet yet again is the likely winner but a correct score of 4-2 to the Power could reflect his toughest test to date and that comes in at best odds of 11/2 with BetBright.

The night concludes with the two-time World Champion Gary Anderson who comes up against Steve West and an even more comfortable evening is set up for the Flying Scotsman. That’s certainly the view of the bookmakers who have Anderson at a best of 1/16 and West right out at 12/1 – once again, those two prices are with MarathonBet.

West has also caused an upset with his victory over Benito van den Pas in the first round but like all the games on Thursday night, this one should go with the favourite. Anderson to throw more 180s gives a little more value at a top price of 6/11 with MarathonBet while a correct score of 4-0 to Anderson is a real possibility and is quoted at best odds of 15/13 with MarathonBet.

Thursday’s fixture list gives us some big name players but as a result, there’s unlikely to be too much in the way of drama. Therefore it’s a case of looking away from the match betting and deciding which of our side markets is most likely. We’re opting for these as we look for a profitable evening.