Please keep in mind that all odds mentioned are accurate at the time published on 26/01/2018 9:29 am and are likely to change.

Following Wigan’s 3-0 FA Cup mauling of Eddie Howe’s Premier League Bournemouth side recently, the League One high-flyers have now set sights on David Moyes’ outfit as their next potential victim.

The Latics almost had Bournemouth out of the FA Cup at the first attempt as Paul Cook’s side led 2-0 at the break at the Vitality Stadium, but a 92nd minute equaliser from Steve Cook saved the blushes of the Premier League outfit.

Those efforts were quickly destroyed in the return fixture at the DW Stadium as Wigan tore into their more illustrious opponents. Goals from Sam Morsy, Dan Burn and Callum Elder gave the Lancashire side the chance to take on West Ham in the Fourth Round.

The Hammers laboured to overcome Wigan’s fellow League One rivals, Shrewsbury Town in Round Three, with an extra-time winner from defender, Reece Burke, to keep Moyes’ side in the Cup.

With the two clubs being two divisions and 34 places apart in the footballing pyramid, you could be slightly surprised to see how the bookmakers have priced up this game. Wigan Athletic are the favourites to progress to the last 16 of the FA Cup, at the current best odds of 9/5. West Ham are a minute fraction behind in the betting at 91/50 with Marathon Bet, while The Draw is available at the best industry price of 12/5 with bet365.

The key reason for the narrow nature of the betting margins for this game in my view is the likely decision that Hammers boss David Moyes will probably take to rest several of his leading players for the match in line with his team selection for the Shrewsbury fixtures.

West Ham has some fine promising young players within their squad, who are likely to be given starting berths at Wigan, but that offers hope that a cup upset could materialise for the home side.

Wigan also has a very impressive home record – albeit at League One level – by conceding just four goals in 14 league games so far this season.

My suggestion for this game is a drawn outcome – with goals likely, if not an obvious choice. Wigan have proven their defensive solidity this season, but West Ham will arrive with the intention of not having another replay, and attack the home side – although they may not get their wishes. 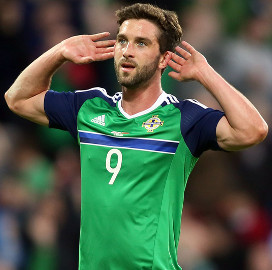 The now hugely famous internet rendition of “Will Grigg’s On Fire” could well be reverberating around the DW Stadium on Saturday afternoon if the Wigan striker can score the opening goal. The Northern Irish international forward is a top-priced 5/1 with Paddy Power and Boylesports. Grigg is in fine FA Cup scoring form this season with four goals in five appearances so far this season.

Former Manchester United midfielder, Nick Powell is the player who takes my eye for the Latics. Powell has hit 11 league goals so far this season, and is a player who should be playing his football at a higher level than League One. He can show his undoubted ability in this game, given the nod, and the 6/1 on offer to score first with bet365 is worth taking.

It is difficult to offer a concrete option for a West Ham First Goalscorer, especially considering Moyes is very likely to shuffle his squad for the game. Ghanaian Striker, Andre Ayew started both games against Shrewsbury in Round Three – without scoring – and could be given another chance to impress here. Bet365 is again the best available price on Ayew scoring first at 8/1.

My view of goals for both teams in this contest is another of my selections as Both Teams to Score is a juicy price of 19/20 with Ladbrokes and bet365. West Ham will definitely arrive with attacking intent for the game, as Wigan will also look to try and get on the front foot, so this bet looks to be a nice option at a fraction under even money.

Regular readers of these betting previews will know I always like to throw in a Correct Score option at larger odds, in the hope of success. My prediction for this game is a 2-2 Full-Time Result, and that can be had once again at a cool 16/1 with bet365 and 10Bet.