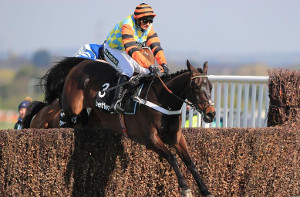 You might think that Christmas is a time for slowing down, relaxing and enjoying some quality sleep in front of the television. Well, there is plenty of time for that of course, but the National Hunt season proves that there is no rest for the wicked.

The Winter Festival takes place over the festive period, and nestled in amongst a fantastic racecard lies the King George VI Chase (December 26, 15:05 GMT); an almost unparalleled highlight of the jump racing campaign.

Contested over 24f at Kempton Park, the list of former champions in this renewal features Desert Orchid, Kauto Star, Best Mate, Long Run and many other high-quality performers of yesteryear and the modern era.

The cream typically rises to the top in this prestigious Grade 1 affair, so who can punters rely on to give them an excellent run for their money?

The bookmakers have installed Might Bite as their favourite (a best price of 11/8 with Coral), and while that price might be a little too stingy for some in what is a quality field, there can be no doubting this eight-year-old’s fine credentials.

It was at this very meeting 12 months ago when the Nicky Henderson schooled bay first caught the eye. Making a step up in trip to three miles, Might Bite led the Kauto Star Novices’ Chase by a country mile before falling at the last, and while that will be enough to deter some punters the context that they should have taken away was that this was a horse who excelled at the longer distance.

And so it has been proven since. Might Bite won the RSA Novices Chase at the Cheltenham Festival – another considerable feather in his cap, and he followed up just a matter of weeks later with another winning effort in the Mildmay Novices’ Chase at Aintree.

We’ve mentioned that classy types tend to come to the party in the King George VI Chase, and in this company they don’t come much classier than Might Bite. He is a worthy favourite and one well worth backing with your hard-earned Christmas bonus.

For a horse to be considered good each way value it has to start at an agreeable price, and for our money Bristol De Mai is far too short at 7/2 with Paddy Power and 10Bet.

This six-year-old’s career was meandering until two notable wins earlier in the season caught the eye of the betting community. But there were caveats to both: in the Charlie Hall Chase, he and fellow leader Blaklion were being stalked by Cue Card, who looked well placed to go and snatch victory before falling.

And then in the Betfair Chase in November Bristol De Mai triumphed by some 57 lengths at Haydock Park, although it has to be said that the track more resembled a mudbath than a grassy meadow after heavy rain in the lead-up, and conditions are expected to be much quicker on December 26.

This is a horse that could win the King George, but there are doubts here – especially when compared to the irrepressible Might Bite – and those are off-putting at such a short price.

Speaking of doubt, we can swerve the next two in the betting as well: Thistlecrack and Fox Norton. The former look primed for future success after winning this race a year ago, but a subsequent defeat in the Cotswold Chase, a long-term injury and a ragged return this season, where he finished fifth of six in a standard fare contest at Newbury, is enough to deter.

Fox Norton, an excellent horse from Colin Tizzard, is making his debut at 24 furlongs here; what a baptism of fire!

Instead, let’s back Whisper as our each way jolly. He lost by a nose and two lengths respectively to Might Bite in that pair of Grade 1 outings mentioned above, won at Kempton in November and finished second in a high-quality Ladbrokes Trophy Chase last time out.