Please keep in mind that all odds mentioned are accurate at the time published on 05/12/2017 7:39 am and are likely to change.

Like all English clubs, Liverpool have been impressive in their 2017/18 Champions League campaign so far and just a point at home to Spartak Moscow on Wednesday night will be enough to see them through to the last 16.

In reality, they should already be through having thrown away a three goal lead against Sevilla in the previous match but an unbeaten record after five games sees the Reds listed as short favourites to take the three points here.

With less than 48 hours to go until kick off, the best odds available on a Liverpool victory stand at 1/4 with Winner Sports. Spartak need the win and the top price for the Russians is quoted at 13/1 with Paddy Power and 888Sport while anyone looking to back the draw can get a best of 13/2 with bet365 and Betway. 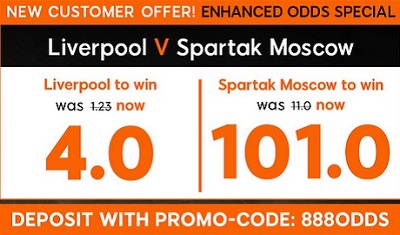 Spartak are third in the table with six points from their opening five games and they’ve done well to remain in contention coming into the final match. A win would be enough but in all probability they would need Sevilla to slip up against bottom side Maribor and that seems unlikely.

What it does mean is that the away side will need to attack from the start and that should leave enough space for Liverpool to win comfortably on the counter. Liverpool to win is the logical conclusion but odds of 1/4 are not exciting us so we’ll look elsewhere for our tips.

The inform Mohamed Salah is the favourite to open the scoring and Liverpool’s prolific forward goes off at a best price of 3/1 with SportPesa. The Reds dominate this market with Daniel Sturridge and Roberto Firmino available at best odds of 4/1 with SportPesa once again.

Even reserve and injured players start ahead of any Spartak Moscow option with Danny Ings at 5/1 with BetBright and Ben Woodburn at 7/1 with Boylesports. The first name for the visitors is therefore that of Luiz Adriano, the Brazilian striker who is on offer at a top price of 18/1 with Unibet and 888Sport to score the first goal in this tie.

The former AC Milan player has nine goals in 24 games for Spartak but a better option would be to consider Adriano in the anytime goal market where he sits at a best of 27/5 with Unibet and 888Sport for a goal in 90 minutes. This could be an option but we’ll stay in the anytime market and back Liverpool’s Roberto Firmino who is in good scoring touch and is our first tip at odds of 20/21 with Betway to find the net at any stage of this match.

Liverpool have been impressive in front of goal in this campaign and with a tally of 16 from their opening five matches, a ratio of over three goals a game is a prolific one. Spartak have been quite productive too with nine strikes over the same period. Away from home the Russians may not be quite so much of a threat but based on those stats, we’ll be taking both teams to score which is reasonable value at best odds of Even Money with bet365.

There is good potential in the overs and unders markets too with an attacking and open game in prospect. Betting over the 2.5 line should be pretty safe and this is an option that carries a price of 4/9 with bet365 but you could definitely be braver here and take over 3.5 which is available at 21/20 with Betway and BetBright.

Finally, as our tips so far have been at relatively short figures, a correct score of Liverpool 3 Spartak Moscow 1 could address that at its best price of 9/1 with 10Bet and SportPesa.

As for the result, Spartak will need to come out and attack and that will suit Liverpool who can exploit areas behind the midfield that become more exposed. Liverpool to win looks obvious while there is better value in the side betting ahead of this crucial tie.