Please keep in mind that all odds mentioned are accurate at the time published on 06/12/2019 10:34 am and are likely to change.

As it stands, we are just four games away from the midpoint of the Premier League season and last year’s winners, Manchester City, are trailing behind runaway leaders Liverpool, by eleven points. This Saturday evening – kick: off 17:30 GMT – sees City host local rivals Manchester United, with both clubs desperate for the points for contrasting reasons.

An indication that City are struggling to keep pace with their Merseyside rivals is in the Premier League outright betting, as Pep Guardiola’s side are as big as 7/2 with Betfred and Betway to retain the title for a third consecutive season, with Betfred being just 1/4 on Liverpool winning their maiden Premier League title.

United are languishing far behind the likes of Liverpool and Manchester City in sixth place on just 21 points, which is less than half of Liverpool’s 43-point haul after fifteen games. The Red Devils claimed a promising 2-1 home win over Tottenham Hotspur to hand new boss – and former United manager – Jose Mourinho’s first loss in charge of Spurs on Wednesday evening. Ole Gunnar Solskjaer’s side face a huge task on Saturday night however, and they will likely have to face their bitter rivals without the French duo of Paul Pogba and Anthony Martial.

Manchester City just cannot afford to drop any points in their quest to catch Liverpool, so the pressure is really on to get the three points this weekend. Will they succeed in that task? Here we will discuss some of the key betting markets to hopefully direct our readers towards some winning selections for the biggest game of the Premier League weekend.

The bookmakers believe this to be a foregone conclusion according to the match odds for this contest. Manchester City can be backed at the best available odds at the time of writing of. Guardiola’s side have won five of their seven home league games this season, with a 2-0 home defeat to Wolverhampton Wanderers and 2-2 draw against Tottenham back in August.

The Draw can be backed with Betfred at 5/1, which could appeal to some punters in the hunt for value, while a victory for United is available with William Hill at the standout price of 10/1, which is surely the biggest price that Manchester United have been to win any Premier League game since its inception back in the early nineties.

United have won two, drawn one and lost one of the last four league meetings at the Etihad, which offers hope of a shock victory. The Reds have been very indifferent performance-wise in recent weeks, and although City are highly likely to win this game, the odds on a United victory are very tempting indeed. 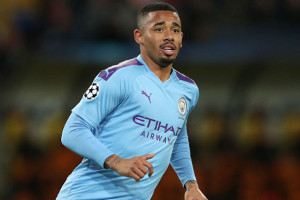 Manchester City’s Argentinian striker, Sergio Aguero will miss this weekend’s blockbuster through injury, but Brazilian understudy Gabriel Jesus proved his wellbeing in midweek with two goals in City’s 4-1 romp at Burnley. Jesus is priced up as the 18/5 favourite with Unibet and 888Sport to open the scoring.

Manchester United’s first interest in the First Goalscorer betting is with striker, Anthony Martial, who is a 9/1 poke with Ladbrokes and William Hill. Martial missed Wednesday’s win over Tottenham for United through injury, so his participation is somewhat unclear. England forward Marcus Rashford has flourished in recent weeks under Solskjaer and is worthy of first goal consideration at 10/1 with Unibet and 888Sport.

Manchester City’s Belgian star, Kevin De Bruyne is a 10/1 chance with VBet, which is significant value in comparison to the 13/2 on offer from the likes of William Hill and Coral.

Others to consider at bigger prices include Manchester United’s Daniel James, who’s blistering pace could unhinge the City back line at 18/1 with Sport Pesa, while centre-backs on both sides – Nicolas Otamendi for City and United’s Harry Maguire could tempt some punters at 28/1 with 888Sport and Unibet for the Argentine, while Ladbrokes and William Hill go 30/1 on Maguire, who is yet to open his United account following his big-money move from Leicester City this summer.

Short-price punters will be considering piling into the 13/15 on offer with VBet for Both Teams to Score in this game. It is almost certain that Manchester City will find the United net, but they often give several opportunities to their opponents – especially this season so far – and United could capitalise on the counter attack, which makes this an obvious choice of bet – albeit at short odds.

With the BTTS bet in mind, our main offering for this game is for Manchester City to win the match with both teams scoring in the game. Coral offer the top price for this bet at the odds of 7/4. Six of the last seven games that City have played at home have all seen goals for the away side – and this game could easily continue that regular occurrence.
As is often with these previews, we like to offer up a Correct Score bet for a small stakes option to give a nice reward if successful. Our selection for this game is a 2-1 win for Manchester City. 10BET are the place to find the best odds of 8/1.