Please keep in mind that all odds mentioned are accurate at the time published on 27/09/2019 8:51 am and are likely to change.

Manchester United under Ole Gunnar Solskjaer have been nothing short of unpredictable. Following an incredible run of success as temporary manager, after previous incumbent, Jose Mourinho was jettisoned out of Old Trafford last year, United have since evolved into a team who are struggling to create and score goals in recent months.

Arsenal, by contrast do not have such issues with regards to scoring goals at least, The Gunners are one of the leagues’ most entertaining teams for goals at both ends of the pitch. Unai Emery’s side make the trip north to Manchester on Monday night with a kick-off time of 20:00 BST.

Before the upcoming round of Premier League fixtures, Manchester United currently sit in eighth place in the table with eight points – level with the likes of Burnley and Sheffield United. Admittedly, Chelsea and Tottenham Hotspur also have eight points, but Manchester United have already made several costly errors against Wolves, Crystal Palace and Southampton to heap pressure on their inexperienced manager. United’s 2-0 defeat at West Ham last Sunday was their worst of the season so far, and the youthful team under Solskjaer must show significant improvement to get anything from this game.

Arsenal sit in fourth place in the league standings with eleven points, and a victory here would cement their place inside the Champions League qualifying spots – albeit at a very early stage. The Gunners have also shown their own inconsistencies already this this season, after leading 2-0 at bottom club Watford, to only leave Vicarage Road with a 2-2 draw. Only, Chelsea, Norwich and Watford themselves have conceded more goals in the Premier League this season, which offers significant hope for the home side in this game.

With both teams desperate for the win, who will come out on top? Read on for our thoughts in this very important fixture.
Date: September 30, 2019

Barring the home loss to Crystal Palace in the Premier League, Manchester United have been competent at Old Trafford this season. Previous wins over Chelsea and Leicester City without conceding have offered some hope for their supporters that United are on an upward curve. United are a top price of 23/17 with SportPesa and SportingBet to regain the winning thread.

Several bookmakers have seen support for the Arsenal in recent hours, and there are not many layers offering 2/1 or better anymore. However, Unibet and 888Sport go 41/20, which is the best around. An Old Trafford stalemate can be had with several firms including Coral at 13/5.

Arsenal need to address their poor form at Old Trafford though, with just two wins in their last 16 visits in all competitions. Emmanuel Adebayor scored the winner, four minutes from full time as Arsenal won their last Premier League game at Old Trafford back in 2006 – in a game that Ole Gunnar Solskjaer was a second half substitute.

United have significant issues in attacking areas for this game. It is unclear if Anthony Martial will return to the team following injury and fellow strike partner, Marcus Rashford suffered a groin problem at West Ham recently. 17 year old starlet Mason Greenwood has spared United’s blushes in the recent home games against Astana and Rochdale with goals in each game, but it is unrealistic to expect the teenager to lead the United attack against Arsenal by himself.

From a betting perspective, the value definitely lies with Arsenal in this game at a fraction over 2/1. Their recent form at Old Trafford is an obvious concern, but on the basis of current form, the price is too big not to take on in my view. 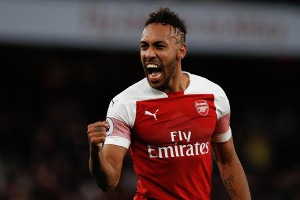 A minor indication that Arsenal are perhaps the team to be on in this game is that the Gunners striker, Pierre-Emerick Aubameyang is the market favourite to be the first goal scorer in this game at 22/5 with Unibet and 888Sport, which highlights Manchester United’s lack of striking options.

Mason Greenwood is the shortest-priced option for United at 5/1 with Betway, while Anthony Martial is an 11/2 shot with Unibet and 888Sport once again, but that price would significantly contract if the French striker was deemed fit.

Arsenal’s big money Summer signing, Nicolas Pepe is a generally available 13/2 chance, while Paul Pogba returned from injury against Rochdale in midweek and he can be backed at 7/1 with Unibet and 888Sport.

Others to consider at bigger prices include Manchester United’s Daniel James, who is a standout price of 19/2 – again with Unibet and 888Sport. The Welshman has already scored three goals for United in the Premier League this season, and he is a generally available 6/1 shot elsewhere.

Spanish midfielder Dani Ceballos is a 16/1 chance with SportingBet, and he is a danger from distance and set pieces, while Harry Maguire could nab his first goal in United colours at the tempting price of 22/1 with Ladbrokes and Coral.

Both Teams to Score seems to be a raging certainty in this game. Attacking would be suggested as the best form of defence for these two sides and the odds of 8/15 with SportPesa look to be reasonable value, albeit at a short price.

Our Correct Score offering for this particular game is a 2-1 win for Arsenal. Our belief is that the Gunners will edge a close game and heap further gloom around Old Trafford. 10Bet offers the best industry price of 45/4 on this score line.