Please keep in mind that all odds mentioned are accurate at the time published on 12/09/2019 9:34 am and are likely to change.

Now that the first International break is in the books, we can look forward to some Premier League action once again this weekend. The highlight of this round of fixtures comes from Old Trafford on Saturday afternoon – kick: off 15:00 BST as Leicester City travel north to face Manchester United at Old Trafford.

Leicester have made a decent start to their Premier League campaign, as Brendan Rodgers’ side currently sit in third place in the league table on eight points, as the Foxes look to improve on their ninth-place finish from last season. Leicester are a vibrant team, full of quality players who are capable of significant improvements on the previous year.

In contrast, Manchester United are a club far more in transition. Boss, Ole Gunnar Solskjaer has made three signings this summer – including former Leicester defender, Harry Maguire – and he has shipped out several high profile players in a bid to return the Red Devils towards the Premier League summit. United are a very youthful team this season, relying on a small squad core of players and academy starlets. With five points so far this season, Manchester United have been careless defensively, which has already cost them better results against Crystal Palace, Southampton and Wolves.

This game should offer several clues to both teams’ finishing positions at the end of the season. United and Leicester will be part of a cluster of teams in the race for the top four spots in the table, and a victory for either team could be the springboard for success.
So, who will come out on top in this fixture? Please read on for our thoughts on this key clash in this weekend’s Premier League action.
Date: September 14, 2019

An indication of Leicester’s chances of victory in this game are shown in the Match Betting odds. United, as a rule, are generally much shorter odds against their opponents at Old Trafford in the Premier League, but on this occasion, the Reds can be backed at the best available odds of 17/20.

The Draw is next best in the betting at 11/4 with Betway, while a victory for Leicester can be taken with Unibet and 888Sport at the top price of 18/5. Leicester City have not won at Old Trafford since Tony Cottee scored in a 1-0 win back in 2000, but this could well be their best chance to repeat that success of 19 years ago.

United are potentially in an injury crisis, with five players who could miss this game, including, Paul Pogba, Anthony Martial, Luke Shaw, Jesse Lingard and Aaron Wan-Bissaka who all pulled out of their international commitments during the week.

If that quintet did miss this fixture, then the current pre-match odds on Leicester would represent significant value. However, I would expect some, if not all of that list to return to the squad for this weekends’ game to boost United’s chances of claiming the spoils.

From a betting perspective, the Draw looks to be the play here at 11/4 with Betway. United have not really fired in an attacking sense this season – barring a late flurry of goals against Chelsea on the opening day. Leicester will pose a serious threat to United – make no mistake – and can grab a share of the spoils in this game at least. 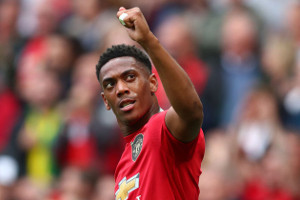 The bookmakers obviously believe that the injury to Anthony Martial will not be significant enough to keep the French attacker to miss this game as the former Monaco man can be backed at the top price of 5/1 with Unibet and 888Sport to open the scoring. Martial missed the recent 1-1 draw with Southampton and his goalscoring prowess will be a big boost to United if he is able to start this match.

United team-mate and England forward Marcus Rashford is also a 5/1 chance with Betfred to be the first goal scorer and his fitness is assured, which could tempt punters to opt for the 21-year old striker. Mason Greenwood has recently made his debut for the England under 21 team over the last week and the 17-year old prodigy can be backed with Betfred and SportingBet at 6/1 – but he is more likely to have a place on the bench for this game.

Leicester’s first interest in this game comes from Jamie Vardy, who is also a 6/1 chance – again with Betfred. Vardy has hit three Premier League goals so far this season, and he will be the main central threat to United.

Others to consider at bigger prices include Manchester United new boy Daniel James, who has taken well to the step up from Swansea City over the summer. James has already scored against Chelsea, Crystal Palace and Southampton this season, and the 8/1 on offer with Betfred could tempt punters on the in-form Welshman.

The Leicester pair of James Maddison and Harvey Barnes are obvious attacking threats and can be backed at 12/1 and 14/1 respectively with Betfred for Barnes. This pair have already been courted by some of the biggest clubs in the Premier League, and the duo could enhance that reputation with goals and a big performance here.

Harry Maguire made his long, protracted move from Leicester City to Manchester United this summer for a world record fee for a defender of £80m. Betfred are once again top price of 25/1 for the England man to break the deadlock.

Both Teams to Score in this game is a raging certainty in my view. United will have the majority of possession and can make that count in terms of goals, but Leicester will definitely pose a strong attacking threat themselves. Victor Lindelof has looked very shaky in the United defence so far this season, and he could be the weak link for the Foxes to take advantage of. SportingBet are offering 4/5 on BTTS, which seems like a license to print money here.

Our Correct Score offering for the game is a 1-1 stalemate, which is hardly useful to either team in truth, but I feel it is a very likely ending to this game. This particular outcome can be backed at good value odds of 13/2 with SportingBet and Betfred once again.