Please keep in mind that all odds mentioned are accurate at the time published on 24/08/2018 11:20 am and are likely to change.

Last Sunday’s defeat at Brighton could be a ‘watershed’ moment for the United boss amid perceived tensions surrounding Old Trafford.

Monday evening’s game with Tottenham – kick-off: 20:00 GMT – could explain lots of things regarding Jose Mourinho’s immediate future as United boss, and his ability to galvanise his squad to bounce back from the south-coast adversity of last weekend.

The arrival of Tottenham to Old Trafford may not offer the ideal opponent for United on the back of such an inept performance at the Amex Stadium, with Spurs beginning their Premier League campaign in good form, with comfortable victories over Newcastle and Fulham.

United will have to be at their best against Spurs to get the victory, but the atmosphere at the self-proclaimed Theatre of Dreams could turn sour if the Red Devils throw in another shocker.

It is rather infrequent over the course of a Premier League season that Manchester United are odds-against to win any league fixture on home soil. The bookmakers have obviously factored in the Brighton defeat to their calculations as the best price on a United victory can be taken with MarathonBet at 167/100.

Tottenham are next best in the 3-way market at 48/25 – again with MarathonBet, while an Old Trafford stalemate can be had with William Hill at the best industry odds of 12/5.

If we can cast aside recent events for a moment, United have an excellent home record over Tottenham, with four wins on the trot in the Premier League – and not one goal conceded. Spurs last won at Old Trafford back in 2013 as Christian Eriksen scored the decisive goal in a 2-1 win.

United have also been proficient under Mourinho in front of home support, and there is reason to stick with the Reds at their odds against price. However, the deficiencies that United showed – especially in their defensive work, Eric Bailly and Victor Lindelof being the most culpable – can be their undoing, and Spurs look to be worth chancing at just under 2/1. 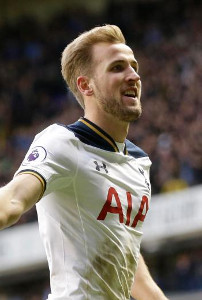 Both teams have potent ‘number nine’ strikers in Romelu Lukaku and Harry Kane, and it will be no surprise for our readers to see the pair at the head of the First Goalscorer market.

Betway is the place to back both of these strikers, as the firm go top price on Kane at 4/1 market leader, and Lukaku as an 11/2 chance.

World Cup Golden Boot winner Kane, broke his unwanted streak of not scoring in the month of August in last weeks’ 3-1 win over Fulham, and he will offer a very stern test of United’s defensive solidity. The 25-year-old England captain is also Spurs’ penalty taker which enhances his potential as an opening scorer.

Lukaku also opened his Premier League account last weekend at Brighton, and the Belgian hitman is excellent value to score first at his odds. Usually far shorter than his current price with Betway, he is likely to be popular with punters to get United off to a good start. A striker is only as good as his service however, and Lukaku will require a far better supply from his teammates than he received at Brighton.

Alexis Sanchez, left out of the United squad last weekend and Marcus Rashford are 7/1 chances – again with Betway to open the scoring, while Anthony Martial is a 9/1 shot, once again with Betway.

Others worthy of noting are Christian Eriksen at 10/1 with Boylesports and 10Bet. Jesse Lingard is likely to be back in the starting line up and is an 11/1 chance with Betway. Paul Pogba has found the net twice so far this season, and the World Cup winner can be backed as short as 8/1 with Unibet, while Sport Pesa are slightly more generous at 10/1.

One of the standout bets for this game in my view is for Both Teams to Score and Over 2.5 goals as a combined bet. William Hill go the biggest price of 11/8 on this selection, and goals at both ends look to be rather likely in this game. United and Spurs have both failed to keep clean sheets in each of their two starts so far this season, and I’m not prepared to back otherwise here.

A chance is taken on the Half-Time / Full-Time market here with the scores being level at the mid-point of the game, but with Tottenham taking the spoils upon its conclusion. This eventuality can be backed at the best industry price of 6/1 with Betfred, as the knives could be out for Mourinho if Tottenham pinch the victory.

Our Correct Score offering is for a 2-1 away win for Mauricio Pochettino’s men at the best price of 10/1 with SportingBet and Betfred as Tottenham can be offered with some confidence to heap more woe on the Old Trafford faithful.