Please keep in mind that all odds mentioned are accurate at the time published on 03/10/2019 11:34 am and are likely to change.

Eighteen points was the difference split between Norwich City, who won last seasons’ EFL Championship title, over Aston Villa last season. It is highly likely that it will be far closer this season in the Premier League, with both teams being content for survival alone.

Aston Villa came with a ‘wet sail’ at the end of their campaign last season and won the Championship Play off final against Derby County to return to the Premier League after a four-year absence. Villa have been very active in the transfer market over the summer by bringing in a host of new faces to attempt to grab a foothold in the top division.

Norwich by contrast, have been rather quiet in the Summer window and relied more on the team that brought success from last season. Villa travel east to take on Norwich City on Saturday afternoon with a kick-off time of 15:00 BST in a very important game for both clubs at Carrow Road.

With just one point separating these two clubs before the start of play this weekend, and both sides already hovering around the relegation spots, a victory for either team would be a huge boost in their quest for survival.

Home side Norwich are the bookmakers favourites to claim the spoils in this game and can be backed at the best industry odds at the time of writing of 11/8 with Unibet. The Villains are not too far behind though in the Match Odds at 2/1 – again with Unibet – while the Draw can be taken with Unibet once again at a price of 27/10.

Norwich will be hoping to build on their last home performance in the Premier League as the Canaries took down the mighty Manchester City 3-2 in a pulsating encounter. It was their second home win this season in the top flight for Daniel Farke and his team, and they must continue to pick up points in front of their own supporters in their quest for survival.

Aston Villa have had three previous Premier League away trips this season at Tottenham, Crystal Palace and Arsenal, and have yet to pick up any points so far. This test is arguably the easiest of the sequence, but Norwich will be buoyant following their recent win over the reigning Premier League champions.

This game is likely to be a tight and tense affair unless an early goal is scored. Both teams will dare not lose this game, which can be potentially deemed as a relegation six-pointer already. Narrow, and it is very narrow preference for Norwich here, who can get the job done by the odd goal. 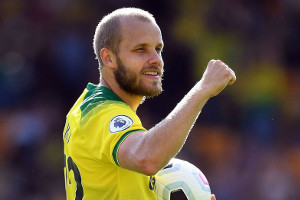 With six goals from seven Premier League outings, Norwich’s Finnish striker, Teemu Pukki is likely to be all the rage for First Goal scorer calculations in this game. The 29-year old has taken the level up to the Premier League comfortably, and he is a player who is full of confidence right now. The 7/2 on offer with Betfred seems to be fair value on the in-form striker.

One of Aston Villa’s major goal threats so far this season has been the former Celtic midfielder, John McGinn, who has already hit three goals for the Midlands club. The Scottish international is a 9/1 chance with Unibet and Betfred to hit the opening goal, and the Norwich defence will have to be wary of his talents.

A couple of other players to consider at bigger odds include Villa captain, Jack Grealish who has some appeal at 12/1 with Betfred. Grealish has yet to really hit the heights his manager, Dean Smith and the Villa Park faithful would have hoped for this season, but he is a very dangerous player on his day, and this game would be an ideal time to help his struggling team.

Norwich defender, Ben Godfrey is worthy of some consideration at the large odds of 28/1 with the likes of Coral and Ladbrokes. Godfrey has been making a name for himself in the Norwich team in recent weeks and has already gained international recognition for the England under 21 side. Godfrey could be the danger man for Norwich from dead-ball situations.

After my previous statement suggesting that this game is likely to be a tight affair, the bookmakers tend to disagree considering the short price available on Both Teams to Score. BetFred offer just 1/2 for each team to find the net in this game, and that is not a bet to get heavily involved in. I’m not suggesting that it will not be a winning outcome, but it does seem very short on this occasion from a value perspective.

The 14/5 on offer with 888Sport for Norwich to Win the Match and Both Teams to Score looks to be far better value. Our belief is that the home side can get the job done by the odd goal and if the bookmakers are correct in their assumption that it is likely that goals will be scored by both teams, then this is the best way to combine the two outcomes from a betting perspective.

A chance is taken on the Half Time score line to be a draw between the two teams and Norwich to prevail at Full Time. Betway and 888Sport are offering the tempting price of 5/1 on this, and it is worth a small investment.
Our final offering for this game is for Norwich to beat Aston Villa 2-1 in the Correct Score market. Betfred are once again the standout bookmaker for this bet at 9/1.