Please keep in mind that all odds mentioned are accurate at the time published on 19/06/2018 12:32 pm and are likely to change.

Thursday’s main event at the Royal meeting is undoubtedly for the stayers as the Group 1 Ascot Gold Cup, raced over the marathon trip of two miles, four furlongs takes centre stage at 16:20 GMT.

Eleven participants currently stand their ground before the final 48-hour declarations are announced, with some old and new names in the line-up for Britain’s most prestigious staying race.

The Ascot version of the Gold Cup was inaugurated back in 1807 and was initially open to horses aged three years and upwards until the change to four years and above came early into the 20th century. The Gold Cup is the first leg of the stayers’ Triple Crown with further events at Goodwood and Doncaster later in the summer campaign.

Previous winners of the Gold Cup include the great Sagaro, who won three consecutive races from 1975-77 under Lester Piggott. Ardross won many staying events in his stellar career, including two back-to-back Gold Cups in 1981-82, with the legendary Piggott once again in the saddle. Aidan O’Brien has won seven of the last twelve runnings of the Gold Cup, with Yeats being the all-time greatest performer in this race with four wins spanning from 2006-09.

Big Orange took the spoils from Order of St George last year in a titanic tussle to the line. Unfortunately, battle will not recommence this year at Royal Ascot as Big Orange is side-lined due to injury.

Once again, our advice is for anyone who wishes to place their bets well in advance of this race, please be aware that very few bookmakers are currently offering the Non-Runner-No Bet concession. At the time of writing, just Betfred and Totesport are going NRNB, therefore, if you decide to back any horse outside of the aforementioned duo and your horse does not line-up on Thursday afternoon, you will lose your wager, so please be mindful before placing any bets.

Here below, we will look in more detail at some of the leading contenders for this key Group 1 race, to try and point our readers in the right direction for a winning bet. 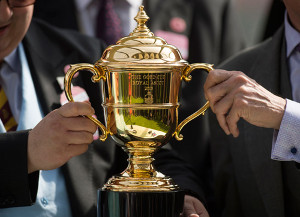 Order of St George is back for the third time this year in the Ascot Gold Cup as Aidan O’Brien’s staying star will look to grab back the trophy he so narrowly relinquished in 2017. Currently installed as the generally available 15/8 ante-post favourite for the race, Order of St George has won five of six races since his defeat of twelve months ago, as the six-year-old is maintaining a very high level of form.

After winning the 2016 Gold Cup, Order of St George was given an official mark of 124 and with his current rating at 123, it will take a mighty performance to lower the colours of the standing dish of the Gold Cup.

This race, like several others of the Royal meeting can be billed as O’Brien vs Gosden as Stradivarius could be the most likely danger to the Coolmore operation. The four-year-old is yet to run over the marathon distance of two and a half miles, but his victory over Big Orange in last year’s Goodwood Cup over two miles suggested he can be highly competitive over further.

Stradivarius can be backed at the best industry price of 9/4, but in my opinion, the price is very short on his actual form.

After finishing a one-length third behind Order of St George in Ascot’s Long Distance Cup on Champions Day last October, the winner carried seven pounds more than Stradivarius that day. Order of St George is six pounds better off for the Gold Cup, so Stradivarius has lots of improvement to find on ratings alone. He is improving though but needs more to figure.

No race of this nature can be worth its salt without some continental flavour as Vazirabad will line-up for trainer, Alain De Royer-Dupre. The French star is making his maiden trip over the English Channel to take on the best Britain has to offer.

The six-year-old is a best priced 6/1 with Boylesports to win the Ascot showpiece and the Aga Khan owned son of Manduro should have no stamina issues over this extended distance, following a Group 1 win over a similar distance to the Ascot race at Chantilly last October. Star jockey, Christophe Soumillon is already booked to ride Vazirabad, and a bold bid is expected on the French raider.

I would like to offer three other options as a potential winner of this race; Torcedor is a best-priced 9/1 shot with William Hill and has been campaigned heavily over marathon distances. Torcedor split Order of St George and Stradivarius in Ascot’s Long Distance Cup last October, and a repeat of that effort could see Jessica Harrington’s six year old go very close.

David Elsworth is pitting his youthful Desert Skyline into battle with the big boys off almost level weights for the first time here and the 14/1 shot with Ladbrokes could run a big race at fancy odds. Winner of the Doncaster Cup last year, Desert Skyline deserves to take his chance in the Ascot race but has several pounds to find on ratings to ultimately feature.

The one intangible of the race is Aidan O’Brien’s Idaho. The five-year-old is totally unproven beyond one mile and six furlongs, but his lurking in the line-up just strikes me as something to consider. It would not be the first time the Ballydoyle supremo has thrown punters a curveball with a big-priced winner at Royal Ascot. If Idaho does indeed stand his ground on Thursday, he could be a player at 14/1 with William Hill.

As everyone knows, not every horse race always goes to form. That being said, at the current prices, Order of St George looks to be the most solid option. He has course and distance form in the book and can be deemed as slightly unfortunate not to be bidding for a hat-trick of wins in 2018. He rates as the likeliest winner.

Vazirabad would be my choice for place money – and could shock the market leaders at 6/1. The French raider has dominated in his own country and now the veteran has a chance against Europe’s elite before time runs out. He could run a mighty race.