Stoke City v Huddersfield Town: Can Lambert Get Off to a Flyer in Relegation Clash?

Please keep in mind that all odds mentioned are accurate at the time published on 19/01/2018 3:52 pm and are likely to change.

With a dearth of high-profile Premier League fixtures this weekend, our focus turns towards the lower reaches of the standings on Saturday, as Stoke City – under newly appointed manager, Paul Lambert host Huddersfield Town at the bet365 Stadium – kick-off 15:00.

The Potters currently lie third from bottom in the relegation spots, but are just four points behind the Terriers, who are in some discomfort in 14th place. Lambert’s first task as Stoke boss will surely be to shore-up the defence, as City have leaked 50 league goals from just 23 games and that’s the most for any side in the EPL.

With just seven points from their last 11 league games, Stoke must begin to turn the tide soon if they are to survive in the top division. Huddersfield themselves, are without a win in five league outings, so this game on Saturday is hugely important for both clubs in their quest to maintain their Premier League status.

Home side Stoke City are the bookmakers’ favourites to win the game, and can be backed at the best industry price of 53/50 with MarathonBet to try and make their move out of the relegation places. The Draw is next best at 12/5 – again with MarathonBet and Unibet, while an away win for David Wagner’s Huddersfield side can be had with Unibet and MarathonBet once again at 13/4.

The two teams have met just three times since 2001 – with all three ending in drawn outcomes. Stoke travelled up to West Yorkshire to face Huddersfield on Boxing Day, which ended in a 1-1 scoreline. Tom Ince opened the scoring on ten minutes for Huddersfield, before Ramadan Sobhi came off the bench to equalise for the Potters on the hour mark.

This game promises to be a tight and tense affair, with both teams likely to be erring on the side of caution at all times. The bet365 Stadium can be a highly vociferous atmosphere, and Stoke need to recreate that cauldron of noise if they are to claim the spoils at the weekend.

Despite being rolled over 3-0 by Manchester United on Monday night, Stoke showed glimpses of fine play, but defensive frailty. If new boss Lambert has worked some defensive solidity into his new side, my hunch is for the Potters to nick a close win against the profligate Terriers. 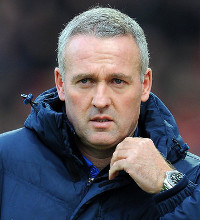 With a plethora of leading Stoke City contenders at the head of First Goalscorer market, it is difficult to offer a selection with real conviction. It would be wise to wait until the teams are announced at around one hour before kick-off to maximise any potential bets, especially considering Paul Lambert could make sweeping changes to his new team. However, we don’t have that luxury, so here below are some players to consider.

I’m going to go out on a limb here and suggest this game will be where Stoke City’s Saido Berahino breaks his long drought in-front of goal for the Potters. With over 1100 minutes played in a Stoke jersey, and 23 appearances without finding the net, the current odds of 6/1 with bet365 and Sport Pesa are hardly the height of value. But, Berahino is a striker, and I believe the law of averages will eventually drop in his favour. MarathonBet’s offer of 47/20 on Berahino to strike at any time could be a more sensible option.

From a Huddersfield perspective, fellow strikers, Laurent Depoitre and Steve Mounie are both 15/2 chances to score first. Depoitre with bet365 and Bet Bright with Mounie’s best odds coming from Betfred. The player who takes my eye is Aaron Mooy at 14/1 with SportingBet. The Australian International has taken the step up to Premier League level in his stride this season, and has been instrumental in plenty of Huddersfield’s best attacking work. He’s worth an interest at the price.

My view for this game is for it to be a close battle with scoring opportunities at a minimum. I have a preference for Stoke to ultimately prevail however, and with that in mind, the generally available 4/1 on offer for a Draw/Stoke, Half-time/Full-time result looks to be good value.

A late winner for Stoke is my idea of the ultimate outcome of this game, so the 6/1 on offer with bet365 is worthy of consideration on the Correct Score market.