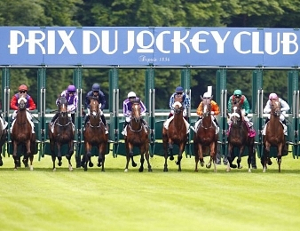 Following the English Oaks and Derby classic races to be held at Epsom on Friday and Saturday, it is the turn of the French equivalent on Sunday afternoon – 15:15 BST start as the Prix Du Jockey Club (French Derby) takes place at Chantilly.

The French version has some subtle differences in comparison to its English counterpart; mainly because the Prix Du Jockey Club course is raced over 2100m (around one mile and two and a half furlongs) with the Epsom version over one and a half miles.

The race was first run back in 1836 based on the model of the English version, although the French Derby was initially restricted to French based horses and run over 2500m. After numerous course and distance changes and cancellations over the years, the Prix Du Jockey Club was given its current Group 1 status back in 1971.

The distance was shortened further in 2005, down to 2100m and has seen French domination throughout its history. Since the turn of the century, only three British trained horses have been successful in the French Derby, with Kevin Ryan’s The Grey Gatsby under Ryan Moore, the most recent in 2014.

The final declaration stage for the Prix Du Jockey Club is on Thursday morning – 09:30 BST – so please be mindful that if your chosen selection is not in the final entries for the race, you will lose your wager if the horse does not run in the race on Sunday afternoon.

Eighteen horses are currently declared to run, but that amount is likely to cut-up to a significantly smaller number. With this article being written before the final declaration stage, there is some guesswork involved as to predicting which horses will actually line-up on the day. However, here below is some of the main contenders, who are expected to be battling out the finish at Chantilly.

Olmedo has been installed as the 7/2 ante post market leader with SportPesa, but the John-Claude Rouget trained colt has stamina questions to answer in my view. After five career runs at no further than a mile, Olmedo may not be guaranteed to stay the extended ten furlongs trip.

Sired by Declaration of War, who was most effective at trips shorter than ten furlongs, Olmedo may well be the best of the French team in terms of ratings and Group 1 form, but he could be one to swerve on Sunday. 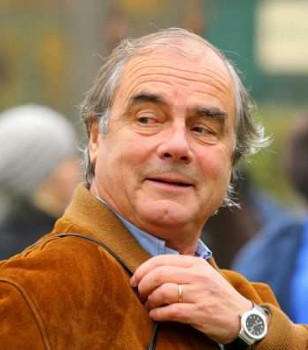 Study Of Man, trained by Pascal Bary can be backed at 11/2 with SportPesa and the son of Deep Impact could well be battling it out for honours on Sunday afternoon. Study Of Man has already form in the book over the Prix Du Jockey Club distance – albeit at Group 2 level by taking the Prix Greffulhe at Saint-Cloud earlier in May.

After setting a steady early gallop, Study Of Man was overtaken with less than three furlongs to go, but was ridden by jockey Stephane Pasquier to retake the lead two furlongs from home to win decisively by over three lengths. That performance was deserving of the chance at Group 1 level and is definitely one for the shortlist.

As with any top class flat race across Europe and beyond, Aidan O’Brien has a multitude of options to choose from. At the current declaration stage, the Ballydoyle supremo has four to consider, with Rostropovich being his most likely runner of note, following his defection from the Epsom Derby. Rostropovich stepped up from a mile on his last start to win the Listed Dee Stakes at Chester over ten furlongs.

The manner of the victory suggested there was plenty left in the tank for jockey Ryan Moore to use if required. O’Brien will know exactly where the son of Frankel sits in his pecking order of horses at home, and if the colt takes his chance, then the best available odds of 6/1 with William Hill and SportPesa are tempting.

Godolphin have taken the decision to supplement the Charlie Appleby trained Key Victory for the French Derby to the sum of €72,000. That is a significant amount of money considering that the prize money for fourth place is €85,650.

A big run is obviously expected by connections from Key Victory after winning his prep race on 2000 Guineas day at Newmarket. While this preview has been written, the odds on Key Victory have shortened from 8/1 into the 7/1 best price currently available with Boylesports and Willam Hill. Those odds are still worth taking on a horse who looks to have solid each way claims at least.

Two horses who could potentially improve beyond Olmedo following their previous run behind the market leader are Dice Roll (11/1 with SportPesa) and Hey Gaman (12/1 with Ladbrokes, Boylesports and 188BET).

Hey Gaman finished a neck second to Olmedo at Longchamp last time out, but British trainer James Tate is undecided on running or to hold put for another engagement at Royal Ascot. If Hey Gaman lines-up at Chantilly, you can deem that as a tip in itself.

Dice Roll narrowly led Olmedo and Hey Gaman inside the final furlong but was headed by both with 30 yards remaining, to go down by a neck. Stamina issues could play their part for the Fabrice Chappet trained colt but Dice Roll has three wins on softer surfaces which could be an advantage in the expected testing conditions. 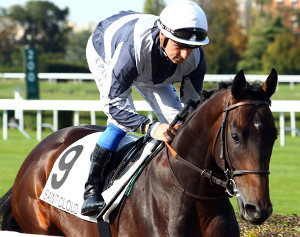 It is a ‘stab in the dark’ in some respects by trying to select the winner of the race without fully knowing the exact line-up, however, my preference is for a home winner in the shape of Study Of Man.

He ticks all the boxes for me; won over the distance and has winning form on testing conditions earlier in his career. One slight concern would be his relative inexperience with just three runs to his name, but the 11/2 with SportPesa is worth taking.

An each-way poke is also taken on Godolphin’s Key Victory at 7/1 with Boylesports and William Hill. The decision to stump up almost the fee to finish in fourth place in this race speaks volumes of his chances in my book and is a definite each way bet.