Please keep in mind that all odds mentioned are accurate at the time published on 14/11/2017 3:53 pm and are likely to change.

The curtain comes down on another year for European Tour Golf and we end with the tournament that traditionally decides the Race to Dubai. The golfer who has earned the most money on tour will be crowned the champion of 2017 but that’s just a side issue as we consider the runners and riders for the DP World Championships.

We always get a strong field here with many Europeans looking to get as many points as possible with which to end the campaign but the favourite is a man who is playing the best golf of his life right now.

The Race to Dubai itself looks to be between two men with Tommy Fleetwood maintaining his advantage over Justin Rose after a tie for tenth at the Nedbank Challenge last week. Rose chose to take a break at that tournament so comes here nicely rested after back to back victories and is a natural favourite at best odds of 7/1 with Paddy Power and 188Bet.

Fleetwood, meanwhile, may be the most likely winner of the Race to Dubai but he’s not ending the season in the best of form and can therefore be found at a top price of 25/1 with Coral. There were glimpses at the Nedbank Challenge that Fleetwood can get back to his best this week but an Each Way bet would be a better option and while Rose is a worthy favourite, there are plenty of alternatives.

Spanish Eyes on The Prize 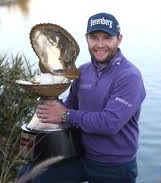 Sergio Garcia and Jon Rahm were locked on the same win price when the markets opened and Garcia has held firm at his original best price of 12/1 with William Hill and Sun Bets. Meanwhile, Rahm has drifted a little to 14/1 with 188Bet.

Both men have closed out the season by missing some of the minor tournaments and while they return for big events such as this Tour Championship, you have to question whether their rhythm will be affected.

There should be no such concerns for Branden Grace who took the Nedbank Challenge in some style on Sunday and the South African can also be found at a best of 14/1 with bet365 and Winner Sports. Following close behind are two English golfers who have enjoyed productive years after finishing first and second in this event back in 2016.

Matthew Fitzpatrick is the defending champion and in reasonable form coming into this event so could be worth another punt at best odds of 18/1 with 188Bet. 2016’s runner up Tyrrell Hatton is slightly shorter at a top price of 16/1 with bet365 and Sun Bets and that’s not surprising considering he landed back-to-back victories on the European Tour last month.

Behind the leading pack there is a clutch of golfers around the 40/1 to 50/1 mark who have recorded strong finishes on the European Tour in recent weeks. Among those is Sweden’s Alex Noren at a best of 40/1 with bet365 and Bernd Wiesberger who can be picked up at that same top price of 40/1 with bet365 and BetBright. Both are capable of winning on the European Tour but this is a much stronger field than the one they face on a weekly basis so perhaps an Each Way or Top Ten bet is a better alternative.

One of the standout prices as we move down the field is the 66/1 with 188Bet next to the name of Kiradech Aphibarnrat. The Thai has regained form in the second half of the season and pushed hard to add to his list of three European Tour wins.

Other players around this figure include Lee Westwood at 50/1 with Coral and BetFred, Ian Poulter at 50/1 with Unibet and 888Sport and Nicolas Colsaerts at 51/1 with 10Bet and SportPesa. All of those have enough potential to get over the line in Dubai.

The action takes place this week at the Jumeirah Earth Golf Course in the UAE and this is one of the longer venues on the circuit at a par 72, 7,675 yards. Naturally there is an advantage for the long hitters but strategically placed bunkers will seriously punish anyone who strays off course so that distance hitting will need to be matched with great accuracy.

Putting is key too with low scoring common amongst our previous winners and with that in mind it’s really tempting to take another look at Branden Grace. Those were the exact qualities needed last week in South Africa and the home golfer was impressive all the way as he claimed victory by one shot.

We’ve seen both Justin Rose and Tyrell Hatton claim back-to-backs in the last few weeks but it remains a rare feat so we’ll demote Grace slightly to an each way tip.

Rose clearly is a fine golfer and one who is arguably in the best form of his life but three in a row may be a stretch. Meanwhile, Rahm and Garcia both make good cases despite their sporadic appearances on the European Tour.

Golf is always a tough call with winners coming from beyond the 100/1 mark so we’ll finish with some Top Ten suggestions. Kiradech Aphibarnrat has form and consistency and is a strong pick at 4/1 with bet365 while Tommy Fleetwood needs to hang on to that Race to Dubai crown and that should spur him on to deliver at 2/1 with Ladbrokes.