Chess is very much a niche sport for the betting community and it’s not one that is widely picked up by the bookies. However, there is a reasonable set of options from around the sportsbooks and when the bigger events come around, there is some value to be found.

One of those events is the London Chess Classic which traditionally takes place in December and has been held every year since 2009. In 2017, there is a strong field descending on the capital and some interesting odds from those bookmakers who have been happy to get involved.

When the tournament first took place, the field comprised eight players: These were eight grandmasters, including the top four players from England and four top class counterparts from overseas.

2009’s inaugural event was won by Magnus Carlsen of Norway who went on to successfully defend his crown the following year. In fact, Carlsen has won four of the eight editions of the London Chess Classic and to date, no English winner has claimed the title on their ‘home turf’.

It remains the most prestigious chess event in the country so who do we have in the frame for 2017?

Magnus Carlsen is back and looking to win the event for the fifth time. The Norwegian starts as favourite to win this year and can currently be picked up at odds of 5/4 with 10Bet. He was just 19 when he won here back in 2009 and on top of that impressive record he is the reigning World Champion so is an obvious man to start as favourite.

Following on at 4/1 with 10Bet is Maxime Vachier-Lagrave who was the World Junior Champion in 2009 and is currently ranked number three in the world. Behind the top two, last year’s runner up Levon Aronian is close at 9/2 with 10Bet once again. 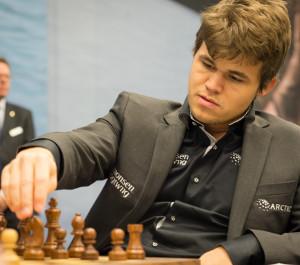 Only five men have ever won the London Chess Classic and five of them are here for the 2017 renewal. The defending champion is American Wesley So but despite having taken the title 12 months’ ago, the 24 year old is out at 9/1 this year with EnergyBet.

The reason behind this is a poor year that has seen So drop from a peak World Ranking of two in March, down to number eight as he comes into this event so perhaps that’s a price that should be avoided.

Our remaining previous winners are India’s Viswanathan Anand who claimed the crown in 2014 and Hikaru Nakamura of the United States who took the London Chess Classic a year earlier. Neither is at their peak right now however and that’s reflected in the markets where Nakamura is at 12/1 with EnergyBet and Anand is further back at a price of 16/1 with EnergyBet once again.

Eight years after the first event was held, the field for the London Chess Classic has expanded to ten players but looking at the prices makes it hard to consider anyone outside of the top three.

At the very bottom of the list we have Michael Adams who is the rank outsider for London at a best of 100/1 with 10Bet. British chess isn’t exactly thriving at the moment and while Adams is the UK number one, he is the sole representative from the host country and not expected to make an impression on the 2017 tournament.

From the outside options, one man to consider could be Fabiano Caruana who is on offer at a top price of 16/1 with 10Bet. The American was third in this event last year and has been ranked as high as number two in the world.

As you might expect, there are very few side markets for any chess tournament so, for the London Classic, it’s all about picking a winner. There are also very few shocks so while Wesley So came through to take the title last year, he was in much better form and his dip since March of this year is accurately reflected in those win odds.

We have seen some surprise outcomes in this event and while Carlsen has been the World Champion in an unbroken run since 2013, the Norwegian has only won this event once during this period.

This may not be a case of having specialist knowledge of chess and just based on quality alone, we think that the bookies have got this right and a price of 5/4 on Magnus Carlsen for another London Chess Classic title is a reasonable one.