It’s been a busy week for sports betting company 1xBet who had previously announced a sponsorship deal in the world of eSports but the operator has now moved back into more traditional circles.

The latest announcement sees 1xBet installed as the global betting partner of Cardiff City, who return to English football’s Premier League for the 2018/19 campaign. The deal will stretch across the next two seasons and is a boost for both parties ahead of a busy period.

Last season, Cardiff manager Neil Warnock guided his team back into the Premier League after  an absence of five years and the experienced boss is looking for a positive campaign in 2018/19. Survival is the minimum target for this Bluebirds side but Warnock will feel that he has the squad in place to over-achieve and to head towards mid-table.

Investment in that squad is naturally going to be important if Cardiff City are to maintain those goals over the next two seasons so this partnership with 1xBet is a welcome one. For their part, the operator will enjoy all the exposure that comes with a Premier League contract so naturally, all sides are excited moving forward.

This is the first association we have agreed within the Premier League, and we are delighted to make our step into it with a hardworking partner such as Cardiff City FC. 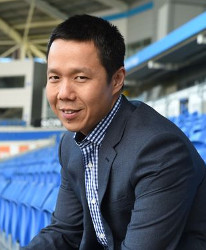 We are excited by our cooperation with 1xBet; they are a forward thinking, progressive business with a large global footprint.

1xBet have been around for some time as an online betting portal but they have some work to do in order to build their brand in the UK and in Europe as a whole. Sports sponsorship is a perfect way in which to do this as it places a company logo directly in front of fans who are looking to take a punt on their club’s matches.

As part of this contract, 1xBet will see their name in various places in and around the Cardiff City Stadium and their logo will be visible via pitchside advertising which will be picked up by the TV broadcasters whenever Cardiff play at home. That exposure will also extend into digital channels including the club’s official website and their social media outlets.

The announcement may have come a little too late for Cardiff to delve too far into the transfer window which closes earlier than usual this season on the 9th of August but the input will remain vital for manager Warnock when it reopens again in January.

Business had already been done and there will be a number of new faces in the side, including that of midfielder Josh Murphy who has arrived from Norwich City ahead of the new season. Over the two remaining years of this deal, Cardiff will be looking to strengthen further and to stay competitive in the EPL for many seasons to come. 1xBet can help make that happen and an exciting time is in prospect for all involved.