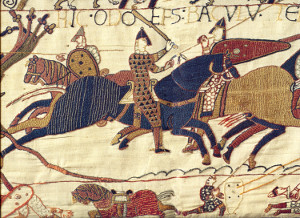 When the Bayeux Tapestry was created almost a thousand years ago, those responsible would have been unlikely to expect a betting market to be set up around this priceless piece of history.

Recent news has told us that the French President Emmanuel Macron has agreed to loan Britain the tapestry and that it will leave the shores of France for the first time in 950 years. It’s likely to go on display here in 2020 but the question for many is where and that’s exactly what the bookmakers are speculating on.

A number of options have been declared by those bookies taking part so let’s get a brief guide to the history of the Bayeux Tapestry and see if we can pick out a winner. 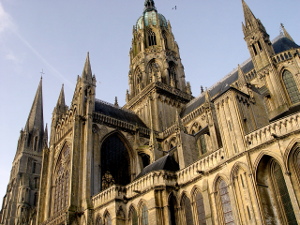 The Tapestry itself is an incredible piece of work, some 70 metres long and 50 centimetres high so while it’s not quite on the grand scale of an icon such as Stonehenge, we can still marvel at the artistry that went into its creation.

The lengthy piece of embroidery depicts the events leading up to the Norman Conquest of Britain in the 11th century and ends with the Battle of Hastings in 1066. We are first made aware of the Tapestry when it appeared in an inventory from Bayeux Cathedral, in Normandy, in 1476. It has spent much of its life there but was subsequently moved to a museum in the town where it currently resides.

Great Britain has requested a loan of the artwork previously, most notably in 1953 for the Queen’s Coronation so this really is a historic and generous move on behalf of the French government. The switch is subject to tests to make sure that the Tapestry is safe to travel and then, the question will turn to who gets the honour of hosting it in the UK.

The favourite here, as far as the bookmakers are concerned is the British Museum in London which is currently available at a best price of 4/6 with both Ladbrokes and Coral. For many, it would seem a logical location with the country’s capital city most likely to accept the honour of hosting the piece and the British Museum being the building with similar artefacts on show from centuries of history.

Second favourite in this market is Battle in Sussex which is available at 4/1 with Ladbrokes and Coral once again. Famously, this is the site of the Battle of Hastings and it does already have its own museum and an Abbey but some work would probably need to be done to enhance the final location and increase its security levels.

Behind the two favourites we have three locations all on offer at the same price of 8/1 with Coral and Ladbrokes and these are Westminster Abbey, Canterbury and Hastings. Of those three, it may be wise to rule out Hastings straight away as the more likely location would be Battle where the famous conflict of 1066 actually took place.

Westminster may be a more logical choice with its connection to English Kings and Queens that has been passed down for centuries and of all the options at that 8/1 figure, that would be our preferred pick. Canterbury and its Cathedral may also have a chance but the connections to the Norman Conquest are quite tenuous and this is another that we think you can rule out.

Completing the list of seven potential locations are York at 20/1 and Leicester at 33/1 and once again, those prices are with Coral and Ladbrokes. York is a huge centre of historic importance in the UK while the theory behind Leicester could possibly tie in with a wider exhibition following the discovery of the remains of Richard III. Once again however, there are towns and cities on this list with far greater connection to the Norman Conquest so we’re not looking for either of these outsiders to come through with a profit. 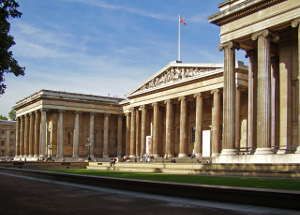 The prices that we have brought you have come from the only two bookmakers to have produced odds so far but with at least two years to go until the Bayeux Tapestry reaches English soil, that situation should change and more bookies should start to send through some numbers.

The catalyst for this shift could come when confirmation is received that the piece is safe to move and then we should see many more operators getting involved. There is further potential for additional sites to be listed although the ones already offered by Coral and Ladbrokes seem the most likely venues.

So, for anyone betting on the Bayeux Tapestry, there is the option to wait but as with any ante post market, there is better value and we think there are some strong prices and therefore some good reasons to get involved right now.

We’ve an obvious favourite here and it is very tempting just to commit to the British Museum which, as an odds on option, is fairly reasonable at that 4/6 price. However, the alternatives look tempting and at this very early stage, there is much to be decided.

The town of Battle in Sussex has every reason to believe it can host the Bayeux Tapestry and in terms of the events leading up to the creation of this artefact, it has better claims than anyone else on the list. The Battle of Hastings was a pivotal event in British history and in a sense, the tapestry would be coming home.

The arguments against would obviously revolve around the relative remoteness of the location in relation to the rest of the country. London provides better transport routes and offers the chance for more people to see this priceless piece so it’s obvious why the British Museum and Westminster Abbey are preferred punts for many.

However, with awards such as the City of Culture used to offer regeneration to Hull and Coventry, it shows that this government is keen to develop tourism in less obvious areas. It may not be a suggestion that everyone follows and feel free to stick with the favourite but we like the notion and the price for Battle to host the Bayeux Tapestry. After 950 years of hurt, the Tapestry is Coming Home!