A busy few weeks for BetFred has continued with news of an extension to their current sponsorship deal with Rugby’s Super League. Prior to this announcement, at the end of April, it was confirmed that the popular sportsbook had renewed an arrangement with the World Snooker Championship and then, further news broke as BetFred were installed as the official bookmaker for Ascot Racecourse.

This week, the Super League deal comes hot on the heels of those agreements and naturally, it’s been a big boost for the sport.

The latest announcement states that BetFred will become the title sponsor of the Rugby League for a further two seasons. This takes the existing arrangement through to the 2021 campaign and while no exact figures have been confirmed, it’s said to be a ‘multi million pound deal’.

The league have also stated that this is their biggest commercial deal ever so it’s no surprise that the announcement has been welcomed with enthusiasm by all involved. 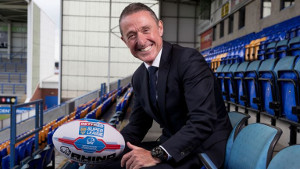 We’re thrilled to continue our partnership with Betfred who have become synonymous with Super League.

They have been a vital part of our journey over the last three years and we look forward to working with them in what is a hugely exciting time for Super League and the sport.

To have the support of someone like Fred who is so passionate about Super League and who shares our vision for its future is fantastic.

On behalf of the operator, BetFred founder Fred Done added:

The real passion for this game shown by the players, the media and, most importantly, the fans, is for me the main reason why this has proved to be such a great sponsorship for us.

Therefore, I had no hesitation in extending the deal for a further two years and Betfred looks forward to working with Super League to help grow the terrific game of rugby league.

Anyone who has followed the progress of BetFred will know that they are a company that likes to actively back the local community. Originally set up as a bricks and mortar betting shop in 1967, they are particularly passionate about their native north west and that outlook continues with this new sponsorship arrangement.

Under the terms of the new contract, BetFred will be supporting Super League social and grassroots initiatives. In addition, the sportsbook will donate in excess of £25,000 to local charities via its Man of the Match awards.

In return for their outlay, BetFred will enjoy significant exposure at rugby league grounds in England and beyond over the next two years. They’ve already been backing the Super League for three seasons and for many punters, they may be the preferred rugby sportsbook so the latest news will only help to cement that position.

That exposure will continue via social media and other digital outlets so BetFred really have landed a good package. With multiple millions going the other way, it’s a deal with balance and we hope the two parties continue to thrive into 2021 and beyond.