The newest members of the Premier League family have lined up a new shirt sponsorship deal worthy of the top flight. As Huddersfield Town join the division for the first time in the club’s history, it’s been announced that the Terriers have signed a multi year deal with betting company OPE Sports which will see the operator’s logo on home and away shirts.

Exposure will be increased further by LED display pitch side while further advertising in the John Smith’s Stadium and promotion via social media increases the benefits for the brand.

As with the vast majority of new sponsorship and betting partner deals, the financial details have not been confirmed although, as Huddersfield Town make their bow in the Premier League, it’s undoubtedly going to be the biggest arrangement in the club’s history. 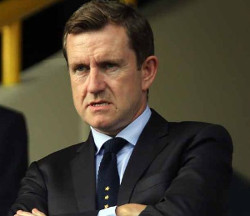 It is, however, something of a new trend to see the length of contract not being disclosed. As the club states, it’s a multi year deal and that’s all we know but it’s certainly one that has pleased both parties.

We are delighted to welcome OPE SPORTS as the Club’s official shirt sponsor. This is without a doubt our biggest season to date as we play in the Premier League for the first time in our history.

The growth of our international fanbase since promotion and the Premier League makes OPE SPORTS an attractive partner for our club.

While Huddersfield Town may not be able to compete just yet with the established teams such as Manchester City, Chelsea, Spurs and Liverpool, it’s of clear benefit for any brand to be associated with a Premier League Club.

The capacity at the John Smith’s Stadium is a shade under 25,000 but the real audience sits outside of the confines of those stands. With Huddersfield in the top flight, a good selection of their matches will be picked up by the live TV broadcasters and beamed into the homes of millions around the world.

Further exposure will come digitally with OPE Sports’ logo shown prominently on the club’s official website and on social media. The Terriers have been busy in the early part of the transfer window and photo shoots with high profile signings Tom Ince, Steve Mounie and Aaron Mooy show them proudly holding up their new team jerseys, clearly showing the name of the new sponsor.

This all adds up to a package that delights the operator:

It’s a hugely exciting time to partner with Huddersfield Town as they make their debut in the Premier League.

a spokesman for OPE Sports is quoted as saying.

The Premier League is undoubtedly the biggest league on the planet and to be associated to it through our partnership with The Terriers is great for our brand.

Those comments just back up what we’ve been saying; the Premier League is simply huge and this is a big deal for a sportsbook that is looking to boost its brand in the UK and beyond.

As soon as Huddersfield Town were promoted via the play offs, the bookmakers installed David Wagner’s team as one of the favourites to be relegated at the end of the 2017/18 season. Success for the Terriers is likely to mean just one thing in this campaign – survival.

Wagner has built a resilient side and while they may not have been the most exciting to watch in the Championship, they were certainly tough to beat and the manager will hope that they carry that ethos into the top flight. Those big transfers required significant funding and more deals may well follow so clearly this is a sponsorship that perhaps holds more value to both parties than many that we’ve seen over the course of this summer.