Having initially joined forces at the start of the 2016/17 season, Dutch Eredivisie side PSV Eindhoven have teamed up once again with Forex Trading brand iForex. The contract means that iForex will be the club’s main shirt sponsor once again as PSV look to battle for the title in the Netherlands’ top flight.

Exact financial details have not been disclosed but we do know that this is another short term deal between the two parties that will take the sponsorship to the end of the current 2017/18 campaign.

The iForex name will appear on the club’s home and away shirts throughout the remainder of the season and that will naturally give them all the exposure that you would usually associate with a contract of this kind. PSV Eindhoven are one of Dutch football’s most popular sides and tens of thousands of fans cram into the Philips Stadium on home matchdays while broadcasters from across Europe and beyond focus on PSV for live TV fixtures.

That has the potential to bring the iForex brand name into the homes of millions so the sponsor looks set to enjoy excellent benefits. 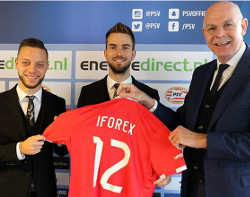 PSV has proven for decades that it is one of the best clubs in the Netherlands and Europe,”

Its youth club and team are renowned for nurturing and developing world class players such as Romario and now Lozano.

We’re used to seeing sponsors going above and beyond the terms of their deal by giving more to the fans and iForex have also done this in a new and interesting way. As part of the terms of this contract, the trader will provide free active investment courses for anyone wanting to learn about trading on the currency markets.

These seminars are intended to promote responsible investing and will take place inside PSV’s Philips Stadium.

We take it upon ourselves to grow and care about our new and existing traders, whilst building long term relationships with them.

PSV won the Dutch title for two consecutive seasons from 2014/15 before losing out to Feyenoord last time around and after 11 games of the new season, they have a big, eight point lead at the top of the Eredivisie table over rivals Ajax.

Winning the domestic title is the main aim for the club and its manager Phillip Cocu and like most Dutch sides in the present day, they struggle to make their mark in the Champions League so domestic competition is a clear priority.

They have a strong squad and Hirving Lozano, who Or Kapelinksy referred to, is a 22 year old Mexican winger who is one of the most exciting talents in world football. It’s early days in the season and PSV look well placed to seal their third Eredivisie title in four years but the club may want to strengthen in the January transfer window.

One option could be to secure a permanent deal for their skipper Marco Van Ginkel who is currently on loan from Chelsea. Manager Cocu could consider this possibility along with a number of other transfers that could see PSV home in on the league trophy.

To do this, they will need to boost transfer funds and that’s why sponsorship deals such as this one with iForex are so important. It’s an interesting deal with an unusual, education element, but it’s one that looks to be well balanced for both parties and it will be fascinating to see it develop over the remainder of the 2017/18 season.