Back in June, sportsbook operator MarathonBet announced a huge betting partnership deal with English Premier League champions Manchester City and the company has continued to push on by confirming a new sponsorship contract with Spanish La Liga side Girona FC.

While exact details have not been made public, it’s a long term deal which will help to grow MarathonBet’s presence in Spain while helping the football club to establish themselves in their country’s elite division.

As part of the deal, the MarathonBet logo will now appear on the new first team shirts at Girona and there will be an extensive presence at the club’s Montilivi Stadium. This presence has been described as ‘various levels of branding’ but will almost certainly include pitch side advertising via LED boards along with other marketing opportunities in and around the ground.

We do know that this is a multi-year deal so it represents a strong commitment on behalf of the operator and it’s a contract that has been welcomed on all sides. 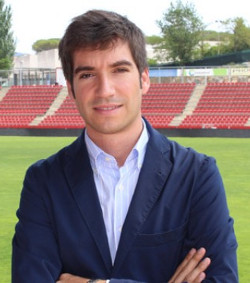 Our agreement with MarathonBet is highly strategic. With this link we have fulfilled our objective of establishing an alliance with a renowned and prestigious company.

Marathonbet will be our first main sponsor since winning promotion to La Liga, so this is a real milestone for the club. We intend to create a close, long-term relationship so that both entities can continue to grow together.

We’re really excited to announce this partnership with Girona FC, one of the emerging forces in Spanish football in recent years. The club are coming off a very impressive debut season in La Liga and we can’t wait to see how the next few seasons unfold at Estadi Montilivi.

Marathonbet and Girona share a similar story in recent years with our emergence in the Spanish market mirroring their rise to prominence since promotion to La Liga in 2017.

Having been promoted to La Liga for the very first time at the end of the 2016/17 season, Girona FC enjoyed an impressive first season in the top flight and ended with a comfortable tenth placed finish. The aim for 2018/19 and beyond must be to maintain that position and to keep in mid-table, away from the relegation zone.

Manager Eusebio Sacristan has assembled a squad that mainly contains domestic Spanish players but there are some overseas imports, including the Uruguayan international Cristhian Stuani who competed for his country at the 2018 World Cup and has previously played for Middlesbrough in the English Premier League.

The squad did well to ‘punch above its weight’ and finish as high as it did last season but Sacristan will know that he cannot be complacent as the new campaign approaches. As this is the first major sponsor to come into the club since they arrived in La Liga, perhaps there will be enough financing made available to attract star names and to even improve on that commendable tenth place.

Whatever happens, it’s an exciting time for FC Girona and certainly a busy one for MarathonBet who continue to build out their commercial partnerships and the deal looks to be a perfect fit for two ambitious parties moving forward.