The fallout from the US Supreme Court ruling on PASPA has seen its biggest development to date with the news that the National Basketball Association (NBA), has signed up its first official betting partner in MGM Resorts.

We’ve seen isolated moves with sponsorship but this is a huge deal and may well clear the pathway for many more to follow.

The move is said to signify that betting will be a big part of basketball’s culture in the months and years that follow and it’s intended to make gambling accepted in the game and in the wider world of sports.

The value and length of the contract were not made public but the deal will also allow MGM to harness NBA data and to take part in official marketing duties across the term. In return, it’s also believed that basketball’s governing body will also be looking for a royalty for each relevant bet staked with MGM although once again, the exact financial nature of this was not disclosed.

NBA Commissioner Adam Silver has long said that betting will become an acceptable part of the game’s culture and it now seems that his words are finally coming to fruition. 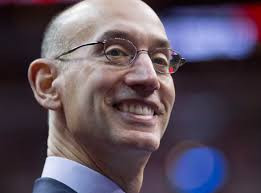 Our collaboration will result in the best possible gaming and entertainment experience for consumers through the use of accurate, real time NBA and WNBA data, and our efforts to maintain and enhance the integrity of our games.

Integrating the NBA’s assets and having official NBA data showcased across the MGM resorts’ platforms will provide us with a distinct advantage and instill more confidence in knowing that our data is directly from the NBA.

The overturning of the PASPA ruling in May 2018 led to an instant reaction from certain sectors of the industry as they looked to make their moves into the US market. Paddy Power and Betfair were among the first group to partner in with a US sportsbook and they led the way for others to follow.

More operators started to set up sportsbooks in casinos and at race tracks in the country but in terms of sponsorship and commercial partnership deals, things have been very quiet until now. We have seen established global operator William Hill lend their backing to United Soccer League side Las Vegas Lights FC but that wasn’t followed up elsewhere.

The NBA and MGM Resorts partnership may well be different as the backing from the operator has been given to one of the largest sports governing bodies in the world. Other sporting clubs and organisations in the US can now see the mechanics of this type of contract and how it can benefit them financially.

For the two bodies directly involved, these are exciting times with the NBA and MGM set to benefit from increased exposure and a widened customer base. In terms of opening the floodgates for similar deals to follow, we wait to see what happens but we should now be entering a fascinating period in sports sponsorship and in the history of United States gambling as a whole.