Saints and Brickhill Capital Partner Up 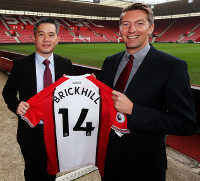 Southampton fans could be in need of a lift right now after a slow start to the new Premier League season that sees them down in 12th place after seven games. After a productive period under Ronald Koeman, the club has slipped somewhat with two managers unable to fill the Dutchman’s shoes and compete at the right end of the table.

The Saints should be looking to spend in January and reinforce their squad so a new Trading Partner deal with Asian operators Brickhill Capital could provide some cheer in the New Year.

Like the majority of these deals we haven’t been given any information regarding the finances but we do know that the arrangement is for an initial period of two years. As an official Asian Trading partner, Brickhill are important as Southampton look to build their fan base in the region so it’s not just simple funding that the company is bringing to the table.

Asia, as a continent, is mad about Premier League football but teams such as Southampton are keen to show them that it’s not all about Chelsea, Liverpool and the two Manchester clubs. This should see their presence grow so there are many ways in which this arrangement will benefit the team.

We are extremely pleased to have entered into this partnership with Brickhill Capital.

We look forward to developing this partnership over the next two years and working with Brickhill Capital as we continue to expand our fanbase in Asia and explore new commercial opportunities across the region.

We are exceptionally proud to partner with such a well-respected and world-renowned club with a significant and growing fan base in Asia.

Our partnership with Southampton Football Club is our first-ever sporting partnership and it demonstrates our commitment to expanding our footprint globally.

As Mr Chen confirmed, this is the first time that Brickhill Capital have entered into a sporting partnership so this is a big deal for them too. Any arrangement with a Premier League side in England is likely to increase exposure for an operator whether the club are at the top or the bottom of the table.

Tens of thousands of fans pack into the St Marys’ Stadium for every Saints’ home game so there will be some clear and direct exposure for those home supporters. But, the Premier League gets much wider exposure for every single game.

Over the course of any weekend, at least four matches will be shown live by the broadcasters while every game gets extended highlights, thereby putting any brand in front of the eyes of many millions.

The Brickhill Capital logo will also appear on Southampton’s official website so there is further, digital exposure being granted to any commercial partner.

It’s been such a subdued start to the 2017/18 campaign for Southampton and the club’s owners will certainly be looking for an improvement in the squad in the months leading up to the new transfer window.

Manager Mauricio Pellegrino may also be feeling the pressure as his underperforming squad struggle to keep pace with the rest of the Premier League. Spending a ton of money isn’t always the answer but Southampton may well be one of the busier clubs when that transfer window does open again in January so funds generated from partnerships such as this one will be vital.

Brickhill Capital will benefit too as we have seen so this is a solid, mutually beneficial arrangement and should see both brands build over the course of the next two seasons.