Like most of the established British bookmaker brands, Coral’s history began in the days before gambling was fully legalised and as such, much of the early operation was a ‘cloak and dagger’ affair. It all began via the company’s charismatic founder Joe Coral, who dropped out of school at a young age as he’d found something far more interesting to do.

Joe’s family emigrated to England from Poland in the early part of the 20th century and after the First World War, the youngster left school at the age of 14, eager to nurture his talent for mathematics. Initially he worked as a pay clerk for a company that manufactured lamps and while in their employ, he ran into a number of bookmakers who saw his potential.

Joe Coral landed a side job as a bookies runner and collected bets on their behalf. It led to a parting of the ways with the lamp making firm but also sowed the seeds for what was to become one of the largest bookmaking operations in the world. Soon, it was time to start taking his own bets.

Having built up some experience in the betting industry, Joe started to accept bets at a local billiards hall in Stoke Newington and a year later, he had a legal betting business trackside at Harringey and White City greyhounds. It may not have been an official name at that early stage but effectively, the Coral organisation had been born.

The business blossomed and alongside the legitimate areas of the company, it is said that Coral had around 70 runners, employed to collect bets from pubs and shops across this area of London.

In those days, Joe Coral and others who were operating an illegal side to their affairs had to stay on the right side of the law. He never landed in trouble for his bookmaking activities but instead, he was fined for a number of petty offences – including failing to notify a change of address and failing to register his marriage.

It was all very routine stuff for an industry which needed to be legitimised and to be allowed to come out into the open. Coral and his business partner Tom Bradbury-Pratt, continued to grow their business ‘against the odds’ until 1960’s Betting and Gaming Act came along and changed everything.

Joe Coral was quick to react to the changes in the law and became one of the first to open a licensed betting shop – in 1961. More followed until the name became familiar on the High Streets of London and beyond. Coral’s main focus was on value and by laying large commissions, he attracted a large share of the new business that was available and became known as the best bet among his rivals.

Now that the whole industry was given an acceptable public face, this became an era of unprecedented growth. Coral set up as a limited company in 1963 and that saw them expand their physical presence into bingo halls, hotels and casinos. They saw very early on that the business wasn’t all about sports betting and these additional areas helped to drive them forward. 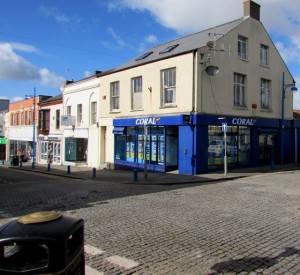 As Coral expanded, the brewing company Bass moved in to buy out the firm, keeping Joe Coral on board as the President of the organisation. He eased back from the day to day running at this time but there was no easing off for the company as it expanded to build 650 betting shops by the end of the 1970s.

At that stage, although their shops were only seen in certain areas of the UK, they were firmly established as one of the four biggest bookmakers in the country. They continued to grow and are now one of the most recognised names in towns and cities all over Great Britain.

Sadly, Joe Coral passed away in 1996 but what a legacy he left as a true legend of the industry.

It will interest those who are following the current Ladbrokes / Coral merger to know that the former company had agreed to buy out its rival as long ago as 1997. At that stage however, the UK Monopolies and Mergers Commission vetoed the deal and as a result, Coral was sold on to Morgan Grenfell Private Equity.

The rise of the internet was also starting to take hold at this time and Coral were one of the first to become involved. Becoming aware of the digital revolution at an early stage was vital for all online bookies and this side of the business has continued to grow.

Presently, Coral are one of the best in terms of value for money with great odds and a range of promotions for their loyal customers who are now based all over the world.

In today’s busy market, Coral has over 1800 betting shops in the UK and, in the guise of Eurobet, they have many more in Italy. Providing this type of service and allowing players to walk in off the street is still very important to the big bookmakers and it’s good to see Coral thriving in this side of the market.

Sponsorship is also important although Coral are a little more subtle than other brands – choosing to avoid the shirt deals that decorate top footballers across the world and settling instead to put their money behind some big sporting events. Horse racing in particular benefits from being backed by this major organisation.

The last set of figures, released for 2013, showed revenue of £1.2 billion and the company employs over 19,000 people worldwide. Due to the merger with Ladbrokes, it’s something of an uncertain future but surely the Coral brand will remain. It’s one of the oldest and most familiar names in the world of bookmaking and its customers will stay loyal in return for the great service and value for money that they receive.